As Ron reports on his blog today, Pixar has a deal with Kellogg’s to promote the upcoming movie Cars, which is set on Route 66 and features the voice of my friend Michael as the sheriff.

Everybody on Route 66 is just dying for the movie to hurry up and come out, because Michael has been teasing us with little bits of information about it for the past four years.

As part of this promotional deal, Kellogg’s is putting little cars in specially marked boxes of cereal. One of the little cars is the sheriff.

A few weeks from now, when this promotion hits the shelves, Ron is going to walk into the kitchen to find me standing at the table with my arm buried up to the elbow in a box of Frosted Flakes, trying to extract my little plastic Michael car from the bottom of the box without having to wait until I finish all the cereal.

The last time I pulled a stunt like that, I was about 5, and I got a spanking for it. But I’m not 5 any more. I’m a grownup. And grownups buy their own cereal, and grownups can do whatever they want with it, and their mommies can’t do anything about it, because that’s what being a grownup is all about. So there. Nyah, nyah, nyah.

It’s good to be a grownup.

Come to think of it, let’s put that on the list of stuff I’m going to do with my new niece or nephew: As soon as the child is old enough to appreciate such pleasures, we will get out a box of sugar-sweetened cereal and plunge our arms into it in search of toys, and if the cereal turns out to be yucky, we will take it to the park and feed it to the ducks, and then we will go have some ice cream, because ice cream tastes better than cereal anyway.

And then Ashley will kick my butt. But I’m gonna be an awesome aunt.

I spent this afternoon in the garden. We aren’t planting yet (we’re still six days from last frost), but I wanted to get the garden laid out and the paths and planting beds all mapped out in advance so we could spend next weekend actually getting the garden in the ground.

Today’s project involved installing some low fencing to mark off planting beds. We found some little wire fence material that looks sort of like a miniature version of the garden fence. We bought 100 feet, which wasn’t nearly enough, so I’m going to the hardware store later to pick up more fencing and more stakes to keep it stable. Hopefully I can find shorter T-posts. I used what I had in the garage, but they were too tall. I think it still looks pretty good, though. Here’s one of the beds: 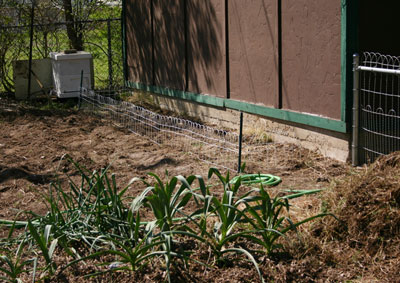 Hope your Sunday afternoon was productive.

It hasn’t worked in a long time. Mom had it repaired for me before she gave it to me for my 16th birthday, but it quit working a few months later, and the jeweler said it was pretty much a lost cause, because the gears were so old they’d gotten stripped out.

But I got it out tonight and set it and wound it up and ignored it for half an hour, and when I peeked at it again, I discovered that it’s working.

I knew it would be.

See, Great-Grandma received the watch as a gift for her 16th birthday. Her boyfriend gave it to her. She didn’t keep the boyfriend, but she kept the watch, and later, after she’d grown up and gotten married, Great-Grandpa used the watch to time her contractions when she had Grandpa.

Grandma had borrowed the watch for some reason right before Mom was born, and Grandpa ended up using it to time Grandma’s contractions.

Great-Grandma gave Mom the watch for her 16th birthday. Mom kept it, and when I was born, Daddy used it to time Mom’s contractions.

Mom gave it to me for my 16th birthday, but I wasn’t planning on having kids, so the watch said, “Well, I guess my work here is done,” and it quit working.

But it started working again tonight.

I went to a lecture this morning that my church sponsored. The topic was aging. It was a good lecture. The speaker gave a lot of advice on how to not feel old. I took a lot of notes.

Too bad I didn’t have my notes in front of me an hour and a half later, when Oliver called to inform me that Ashley is pregnant.

I am, of course, utterly thrilled by this bit of news.

I am also feeling OLD.

There are certain things I think of when I think of my little brother.

Watching my little sister’s reaction to Mom’s pregnancy, for instance. Grace was not quite 2 when Oliver was born. When Mom was about umpteen months pregnant, Grace would stand on tiptoe to peek up under her shirt, wave at her belly, and say, “Hi, baby!”

Watching Oliver blow out the candle on his first birthday cake. I still remember the cake and one of the toys he got for his birthday.

Listening to him stick up for me when he was about 3. Some boys in my class liked to pick on me, and Oliver wasn’t having any of it: “You just tell those boys they’d better not mess with you, ‘cos you’ve got a little brother at home who knows how to kick butt.”

Watching him tear around like a maniac, grabbing any vaguely swordlike object — ruler, pen, stick, fork, paper-towel tube, whatever — and raising it above his head while shouting, “Thundercats … HO!” like his favorite cartoon character when he was about 4.

Making fun of him when he was in grade school because he had to be taken to the doctor to have a piece of an ink pen extracted from his nose after he stuck it up there as part of a weird little impromptu comedy routine.

I took him out to Tucumcari one weekend about three years ago, and he spent the entire trip entertaining me with his weird little impromptu comedy routines. I laughed so hard, I thought my sides would never stop hurting. I hold him personally responsible for the lines around my mouth and eyes. To this day, I cannot walk into Clanton’s Cafe in Vinita without thinking of one of Oliver’s weird little impromptu comedy routines and laughing so hard that my face hurts.

He will tell me funny stories about his funny kid, and I will laugh and laugh and laugh, and the lines around my mouth and eyes will get deeper and deeper, and I will look old before my time, and I will feel old, thinking of Oliver as a baby and listening to him tell me stories about his baby, and I won’t care, because people will look at me and say, “See the laugh lines in that old lady’s face? She must be blessed. She must have a hilarious life.”