(NOTE: If you surfed in here in search of the song “Orion,” please click here.)

A friend and I were talking about photography recently, and I was telling him that my best images always come out of those rare moments when God sets up the shot for me — perfect lighting, perfect weather conditions, perfect moment, perfect whatever — and all I have to do is see it and push the button before it gets away.

I promised him that one of these days, when I had a hand free, I would toss a few examples online for him to see. I have a hand free tonight, and I think I'm going to make this a permanent feature on the blog. I'll add to it whenever I get a keeper.

I shot this first image in October of 2000, at the Leaning Tower of Pisa replica in Niles, IL. I'd been dinking around with my aperture and fussing over the light meter for probably five minutes before I finally decided I was ready to take the shot. Just as I released the shutter, this flock of pigeons sort of exploded out of the tower and into the frame. I love the movement:

On my first Route 66 trip in August 2001, I was lying on the ground under the Blue Swallow Motel sign in Tucumcari, N.M., trying to shoot something from Scout's eye level for a project I was doing, when I got this next one. I thought about the way dogs look at things, tipped my head sideways, and — voila! — there was my shot. The atmospheric conditions in Tucumcari's high desert climate give neon photos a clarity and vibrance I haven't been able to replicate anywhere else. 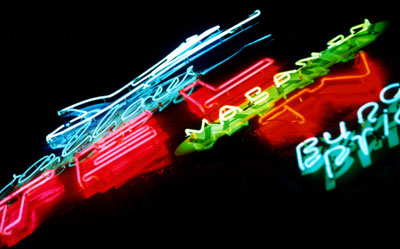 On the same trip, we stopped in Seligman, AZ, where I took this photo of Angel Delgadillo, the famed "Guardian Angel of Route 66." I explained what I was doing and asked Angel if I could photograph him from my dog's eye level. He agreed, and — much to his amusement — I proceeded to lie down on the ground at his feet and look up at him through the viewfinder. I couldn't have coaxed a better smile out of him if I'd tried: 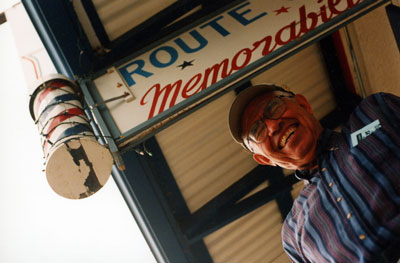 Ron and I were still living in Illinois in December 2002 when we decided to light out for Oklahoma one weekend to visit friends and take pictures of Route 66 in the snow. We came through some spectacular winter storms that glazed the Route 66 corridor with ice all the way from St. Louis, MO, to Texola, OK. This next picture is of the old Regal Reptile Ranch sign just east of Texola. It wound up serving as our 2003 Christmas card image. 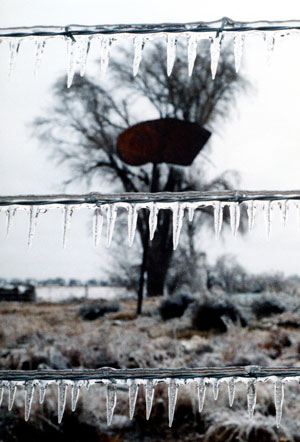 My little brother had never been west of St. Louis County in his life when I invited him to join me on a crazy weekend road trip to Tucumcari for a festival in July 2003. We had just driven out from under a dazzling electrical storm and into a beautiful Texas Panhandle sunset when Oliver said, "Oh, my God. Look behind us." Of course we had to have a photo op when I turned around and saw that double rainbow.

I have a theory that terrific light just follows my friend Michael around, because two of the best portraits I have ever taken involved Michael under ideal lighting conditions.

The first is this one, shot in October 2004 at the Route 66 Diner in Tulsa. I take no credit for its artsiness, because I truly had no idea what I was doing. I just liked the way the light was hitting his face, so I squeezed off a couple of frames. The image I saw through the viewfinder was very warm, very gentle, very flattering. This moody chiaroscuro thing turned out to be much more interesting than the portrait I thought I had.

I didn't notice that glass on the table or the Rose's sign in the background until I got the prints back and looked at them. I love that sign, because it gives the whole thing kind of an Edward Hopper vibe.

As I said: Good light just seems to follow Michael around. Here he is with Suzanne on a bus trip they led in November 2005 for the Tulsa Foundation for Architecture. We stayed at the Kerr Mansion in Poteau, OK. I have been dying to photograph them ever since the first time I saw them together, because after 20-some-odd years of marriage, they are still as crazy about each other as a couple of newlyweds … so when I wandered in for breakfast and noticed all this soft, golden light pouring through a huge wall of east-facing windows, I took advantage of a rare opportunity. I really like the results:

I got this shot on that same trip. I wish I'd had someone handy to photograph, because this would have made a great setting for a portrait, but I was wandering around another part of the museum, and by the time I got in here and noticed this window, everybody else had taken off to explore another area. Not bad for the one that got away, though. I think it looks like it ought to be on the cover of a self-help book or something. 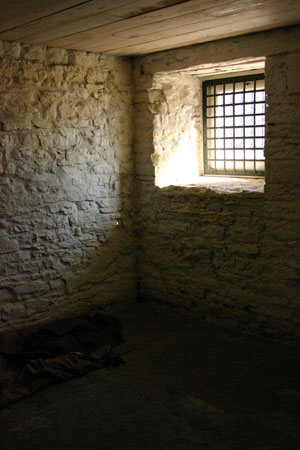 I looked out the window of the Rock Cafe in Stroud one evening in late January 2006 and noticed this Maxfield Parrish sky behind the Rock's beautifully restored neon sign. Yow. Za. I just love the colors. 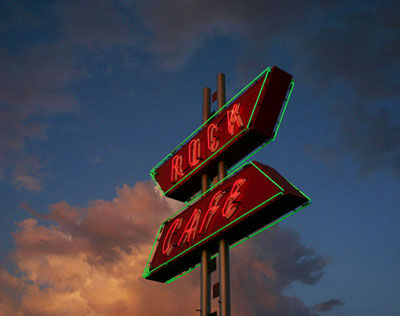 Stay tuned; I'll post more images as I get them.

37 thoughts on “Hit me with your best shot”