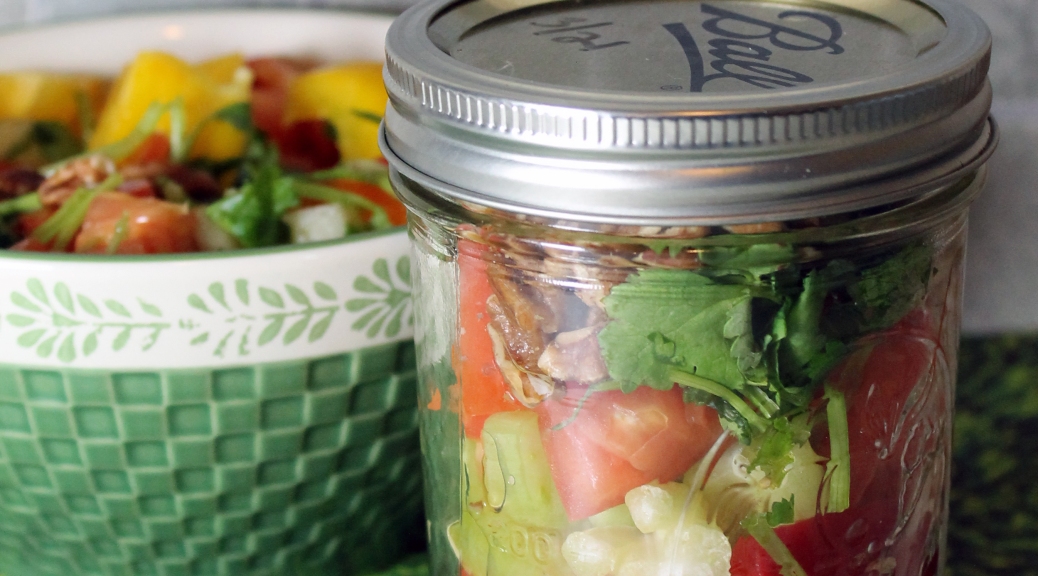 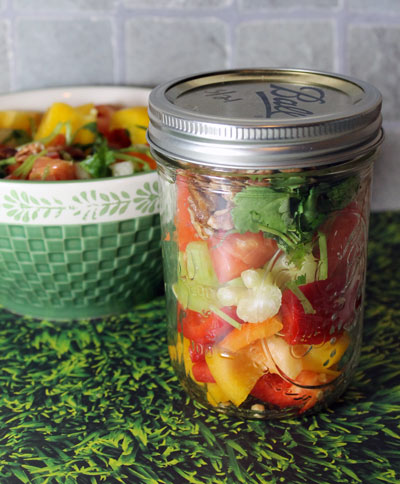 Whether you’re vegging, counting calories or just trying to get more green stuff in your diet, finding something suitable to eat on the fly can be tricky.

One way around that is to prefab your meals. That works fine with casseroles, soups and pasta dishes, but salads tend to get yucky in a hurry.

Enter this awesome idea I cribbed from The Kitchenista, who posted it on her Twitter account one day several weeks (months?) ago after hearing about it somewhere and giving it a whirl. This isn’t so much a recipe as a technique, but it proved so handy that I decided it was worth sharing.

By layering ingredients strategically, filling the jar completely and closing it tightly, you can keep salads fresh for much longer than you could if you just tossed a salad and packed it into plastic containers. Normally, a salad wilts or starts getting slimy after a couple of days in my fridge, but I made the salad you see above after work Saturday night and shot the picture Thursday night. I was particularly impressed with how well the cilantro fared; fresh cilantro tends to spoil quickly, but it held its own just fine in the jar.

I didn’t have any salad dressing on hand, and I knew I’d be eating these at home, so I just layered vegetables in the jars and topped them with a handful of pecans I had leftover from a candymaking project a few weeks ago. When it was time to eat, I just tossed a handful of prepackaged lettuce in a bowl, dumped the contents of the jar on top and drizzled the salad with a little olive oil and balsamic vinegar. If I were making these to take to work, I’d use bigger jars and spring for some ranch dressing.

The big trick here is to put a barrier between the dressing and the more delicate ingredients, which will turn to sludge if they spend too long in the dressing. Basically, you put the dressing in first, then add a layer of sturdy vegetables that won’t get nasty if they swim in dressing (cucumbers and peppers work well for this), followed by proteins, delicate vegetables such as sprouts or lettuce, and garnishes such as nuts or seeds. You could make a pretty respectable vegan lunch out of tahini dressing (whisk together equal parts tahini, lemon and water), your favorite vegetables, and a handful of soynuts, cashews or almonds.

If you need full-blown salad recipes, Tammy over at Organize Yourself Skinny has several here.