I’d planned to start seeds indoors this year, but after the growlights I bought from Amazon turned out to be defective, I moved the whole operation outside, with the help of some new tools.

First, I took Mom’s advice and did some winter sowing, which involves turning plastic bottles into miniature cold frames. I’d been saving 96-oz. cider jugs for this purpose all winter. They turned out to be just the right size to slip down into the holes in some cinderblocks I had on hand. The blocks provide thermal mass while keeping the jugs from blowing away. I need to thin the plants, but they’re doing very well.

My little cider-bottle cloches are parked in a raised bed made from a $45 feed-store fire ring and filled with a mix of potting soil and chicken litter — a technique I first used in my juglone-contaminated garden in Cape. Come planting day, I’ll mulch with cedar shavings to discourage bugs.

I found a bargain I couldn’t pass up at Tractor Supply a couple of weeks ago: $40 walk-in mini-greenhouses.

To keep it warm and protect it from the wind, I parked mine in a sheltered corner next to my office window and anchored it with cinderblocks and bungee cords.

The new greenhouse is proving to be a nice place to start herbs:

Out of an abundance of caution, I decided to grow a Victory Garden this year, focusing on reliably heavy producers: okra, green beans, cucumbers, collards, zucchini, and potatoes. If supply lines get screwed up, we’ll still have plenty to eat; if they don’t, we’ll have plenty to share with people whose incomes have been compromised by the coronavirus-induced drop in tourism.

Score one for Pinterest: After an infestation of caffeine-junkie fruit flies this summer, I ran a search for organic solutions to the problem. This one, courtesy of Suburban Turmoil, kept coming up.

For any method to work on a long-term basis, you have to start by finding the source of your bugs. In our case, the flies came in with some dodgy bananas, invaded the compost bucket in search of coffee grounds (apparently a great favorite of fruit flies — not that I blame them) and decided the filter on the underside of the lid was an ideal place to raise kids.

To eradicate the larvae and eggs, we replaced the filter, and to kill the adults, I used Suburban Turmoil’s technique:

Get a Mason jar with a lid. Fill it about halfway with apple-cider vinegar. Add a couple of drops of dish soap, put the lid on the jar, and shake until it’s good and sudsy. Open the jar, add enough water to bring the bubbles up to the top, and leave it out overnight.

The bugs will smell the vinegar, think you’ve got rotten apples for them to snack on, and become trapped in the suds when they try to check it out.

I caught the better end of 30 flies the first night, and over the next few days, this sneaky little trap killed at least 100 more. Every time the suds died down, I closed the jar and shook it up again, adding soap or vinegar as necessary and replacing the solution a time or two until I stopped finding bugs in it, which took maybe three or four days.

I don’t know the blogger over at Suburban Turmoil, but I definitely owe her a beer for this excellent solution to a really annoying problem.

As promised, here is the update on my quail project. As those of you who have been around here for a while know, I’ve kept quail off and on for two years now, with varied results.

Based on my experience, quail have three major drawbacks that make me hate the city’s anti-chicken ordinance with the fury of ten thousand Africanized honeybees:

1. Coturnix quail chicks are incredibly stupid, which makes them difficult and frustrating to raise.

2. In addition to being tiny, quail eggs have very thin shells and very thick membranes, which makes them difficult to crack without breaking yolks and getting flecks of shell in your breakfast.

3. Coturnix quail are messy and will waste more food than they eat. I spent an outrageous amount of money on feed and bedding last year after my poor little stupid birds threw their food all over their pen instead of eating it.

I solved the first problem by purchasing adult birds from an ol’ boy out near Little Grassy Lake who raises quail for hunters to use in training bird dogs. Babies are cute and fuzzy, but adults are the only way to go if you don’t want to drive yourself crazy.

I solved the second problem by ordering a pair of quail-egg scissors from Amazon.com. No more broken yolks, and no more eggshell in my sandwiches. Best eight bucks I ever spent.

The third problem took a bit of research, but I was delighted beyond belief to find the solution on YouTube:

If you’re considering quail, buy yourself a cheap soldering iron and a 99-cent plastic shoebox and make this little feeder. The whole project will pay for itself in less than two weeks. (I already had a soldering iron in the garage, so my feeder paid for itself in about a day.) My birds went from wasting a cup (or more) of feed a day to maybe a teaspoon.

I live too far from Wisconsin to buy this guy the beer I owe him for sharing this design, so I’ll do the next best thing and send some traffic to his website, Homesteading Ways. Seriously — go check it out. He and his wife have some good stuff on there.

I know, I know, I owe you an Eco-Saturday. I had one in the works, but I’m being treated for insomnia, which has created some obstacles to my usual blogging patterns. (The tradeoff: I might finally catch up that sleep deficit I’ve been running since 1988.)

Anyway. I’ll make it up to you next weekend, but in the meantime, I want to show off the work we did for the garden today.

I’ve spent most of the winter buying a galvanized metal fire ring every couple of weeks and rolling it into the garden to use as a raised bed. I now have six rings — five lined up in the garden, and one tucked into a shady corner next to the garage door, ready to be inoculated with the morel mushroom spores Ron ordered for us the other day.

I had some good intentions about using the rings as composters, but I haven’t had time to pick up horse manure this winter, so we just took advantage of a pretty afternoon to cruise up to Lotus NatureScapes, where we picked up seven big Rubbermaid tubs full of compost for $10. You read that right: $10 for all the compost we could haul home in my station wagon. A similar quantity of prepackaged topsoil from a big-box store would have cost at least $75, and I’d have had a mess of non-recyclable plastic bags to deal with when I finished. Such are the merits of bulk purchases from mom-and-pop businesses.

Anyway, we filled two beds and got a good start on a third. If the weather cooperates, I’ll try to pick up a few tubs of manure next weekend and start cooking up some thermophilic compost in the remaining rings. We’ve still got plenty of time to make a couple of batches before spring.

While I was moving the fire rings into position in the sunniest part of the garden, I repositioned the walkway slightly and put a thick layer of leaves — which Ron has been piling back there since November — between the beds to keep the weeds down. Here’s how it looks now:

They should be more impressive come July, when big, healthy tomato plants are growing out of them.

When I finished with my outdoor gardening, I came inside and set up my planting shelves so they’ll be ready to start seeds next month: 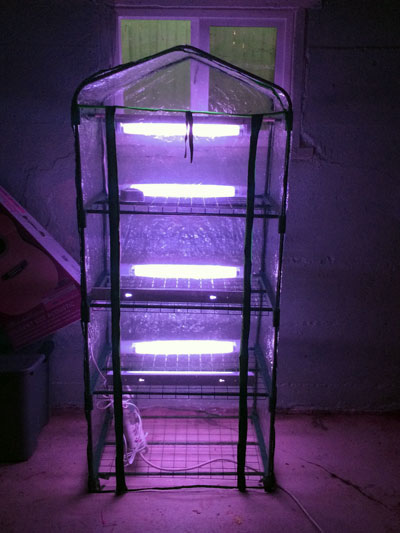 I borrowed an idea from Ron’s mom and outfitted each shelf with growlights. I’m keeping the shelf in the basement this year so I won’t have to spend all my time chasing the cat out of it. (I should probably tell the guy next door that I’m starting tomatoes down there so he won’t mistake my Tigerellas for weed and call the cops. I love our local K9s, but this house is altogether too small for an enthusiastic German shepherd to go dashing through it in a futile search for nonexistent contraband.)

I’m blogging from the iPod tonight because the weather is too rough to leave the Mac plugged in.

We spent the day on 66, getting more photos for my picture-per-mile project.

The big news today is that one of our hens — Honey, the brown leghorn — has gotten so aggressive with the other birds that we had to separate her from the flock today to protect them, and when I get home from work tomorrow, we are going to find out whether I have the gumption to butcher my own dinner.