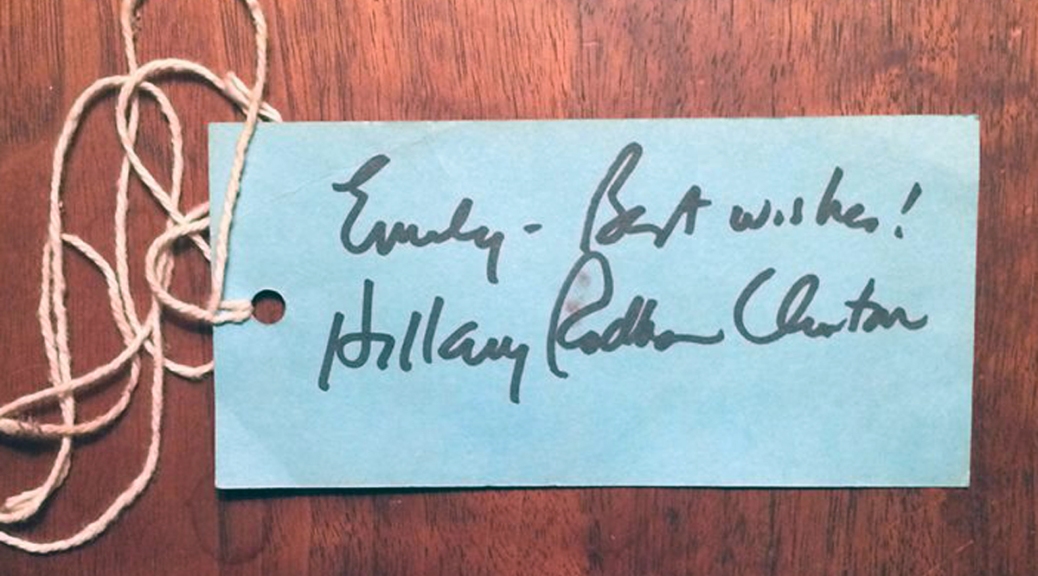 I mailed her a letter yesterday explaining why. One letter won’t make everything all better, but I’m sure she’s getting a flood of them, and I hope the outpouring of support makes her smile. Here’s the one I’m adding to the pile:

The year was 1992. I was 17, a senior in high school, and I was feeling conflicted. After two months as editor-in-chief of the school newspaper — a position toward which I’d worked diligently for years — I was beginning to suspect the job was more trouble than it was worth. I’d already had run-ins with a condescending school superintendent who assumed I was incompetent simply because I was young, and with several friends who didn’t understand why I couldn’t adjust deadlines to suit their whims. I was tired, burned-out, and ready to walk away from the whole mess.

I awoke one cool October morning to hear my mom’s voice floating into my room: “The Southern Illinoisan says Hillary Clinton is coming to SIU for a rally on Saturday.”

After a moment or two of Kermit-flailing and incoherent fangirling, I pulled myself together, picked up the phone, and made arrangements to attend the rally and subsequent press conference.

That press conference was life-altering.

From the time I was little, all I’d wanted was to be treated like a grownup. As a young reporter, I was rarely afforded that courtesy; most adults talked down to me, pressured me to violate my ethical standards, or exchanged patronizing “isn’t-she-cute?” smiles over my head.

You didn’t do any of that. I wasn’t even old enough to vote, but when I asked you a question, you looked me in the eye and answered it in exactly the same tone you’d used with all the other reporters. You treated me like a grownup. You made me feel respected. You gave me confidence. And in that moment, you renewed my enthusiasm for journalism.

With the exception of a few years spent teaching high school in Oklahoma, I’ve been at it ever since.

Without our brief exchange, I’m not sure I’d have stuck with it. When deadlines get too hectic, or editors get on my nerves, or the economy hiccups and I wonder whether it’s worth the low pay and the constant uncertainty, I close my eyes and remember a sunny autumn afternoon when the most powerful woman in the United States saw a kid doing a grownup’s job and treated her with respect and courtesy.

I adored you for that. You became my personal hero; I wanted to be just like you when I grew up. I studied endless articles about you. I bought myself a green suit and matching headband “just like Hillary’s.” I even showed up for senior pictures in an “Elect Hillary’s Husband” button.

I have never been more proud of you than I was Wednesday, when you stood, resolute but gracious, and addressed your supporters, still on your feet despite the vicious sucker-punch you’d just absorbed for all of us: the Suffragettes; the Second Wave; the girls who grew up watching Geraldine Ferraro and dreaming; the little girls my niece’s age; my mom; my former students; and all the 17-year-old girls trying to be grownups in a world that prefers to treat women like perpetual children, whether we’re 17 or 41 or 69.

I’ve long since lost that green headband, but 24 years later, I still want to be just like you when I grow up. 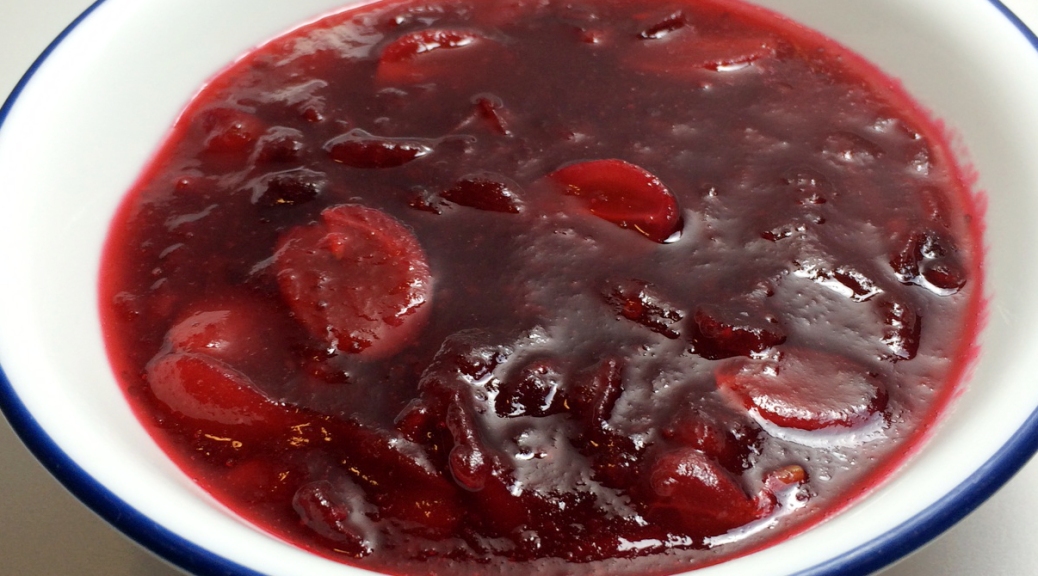 This post is late this evening because I had to pick up some canning supplies so I could put up today’s recipe as soon as I finished cooking.

About nine years ago, my friend Laurel gave me a big bag of cranberries she’d brought back from a Maine cranberry bog — and then, upon discovering I’d never made homemade cranberry sauce, gave me a recipe and instructions for making some.

I lost Laurel’s recipe in the Great Mac Crash of 2013, but I’d riffed on it in 2007 and had enough presence of mind to post it here.

I’m grateful for that. Laurel passed away in January. I think of her every year and smile as I listen for the berries to pop, remembering the day I stood in her kitchen in Tulsa as she explained the steps.

I smiled tonight, blinking back tears and remembering Laurel and thinking about how amused she would have been by the latest political revelations that were pouring into my Twitter feed as I stirred the sugar syrup.

I hope you enjoy this recipe as much as I have and use it to make some happy memories of your own.

Peel and chop apples. Wash cranberries and any other fruit you’re using. (I used grapes tonight because I had some on hand, but I’ve also used strawberries, blackberries and extra apples, all of which produced equally good results.)

Stir sugar into water and bring to a boil in a big saucepan, stirring frequently.

Add fruit, reduce heat to medium-low, and simmer for 10 to 15 minutes, stirring frequently. You’ll hear the berries pop as they cook. Remove from heat, stir in honey, and let stand to thicken.

Cranberry sauce cans very well; just leave a half-inch of headspace and process for 10 minutes in a boiling-water bath. I made three batches tonight and put them up in wide-mouth pint jars.

I had occasion to call a former employer today and chat with one of my favorite editors ever. Long story, but a homicide investigation involving a victim from my area resulted in a couple of arrests in my old paper’s coverage area. I was having trouble sorting out some conflicting reports and putting my hands on a document I needed, so I called my old newsroom to see what I could rustle up.

Some things never change — like the fact that you absolutely cannot trust a St. Louis television station to get even the most basic information correct in a story about anything that happens on the east side of the Mississippi River. The fact that the public information officers in Illinois State Police District 11 are more helpful than the PIOs pretty much anywhere else in the state. And most of all, the fact that the editor who taught me to cover crime stories back in 1999 is still my favorite person to hear on the other end of the line when I’m chasing down details and trying to wrangle information out of reluctant sources.

I don’t miss that town’s ridiculous city ordinances. I don’t miss the corruption of its local government. But I’d be lying if I said I didn’t miss the incredibly talented people who populate the newsroom of its daily paper. That newsroom isn’t big, but the amount of talent it harbors is truly spectacular, and I’m awfully glad I got to spend my first few years as a full-time journalist there.

So I now officially have two mural-painting projects lined up for this spring on Route 66.

For the first, I’ll be spending about a week painting a mural in one of the garages at the Blue Swallow Motel in Tucumcari, N.M. The owners and I haven’t settled on a design yet, but they’re getting me some measurements and looking for some historic photographs I can use as the basis for a rough sketch.

For the second project, I’m spending a couple of weekends painting a mural on the side of a privately owned tourism center in Staunton, Illinois. Depending on the weather this spring, I may do that one first. We’ll see.

I’m pretty amped about both projects. The one in Staunton will have kind of a rainbow theme, which means I’ll be carrying on a tradition of sorts: I was obsessed with rainbows when I was 9, so in addition to icing a rainbow on my birthday cake, Mom painted a rainbow and clouds on my bedroom wall.

It’s been a couple of years since I worked on a mural, and this one in Staunton will be my biggest yet — 60 feet long and 10 feet high, which is at least twice the size of anything I’ve done up to this point. We’ll see how it goes.

We went up to Staunton this afternoon so I could take some detailed measurements and put my hands on the surface I’ll be painting. After doing murals on smooth interior walls, waferboard, textured Masonite, two kinds of siding, and a late-model car with its factory finish intact, I’ve come to appreciate the value of handling the surface and looking for potential obstacles before I start the mural instead of jumping right in and then realizing — after I’ve already invested several hours in the project — that the wall is resisting (or worse yet, drinking) the paint, or there’s an electrical outlet right smack in the middle of my design, or something else that would have been good to know in advance.

On the way back, we stopped at the Michael’s store in Edwardsville, where I picked up some materials for staging nicer food photos. While we were there, I caught a sale on canvas and stocked up. Stay tuned for whatever creative outburst that inspires.