Several weeks ago, I picked up a special brush designed to clean the coils on a refrigerator.

I don’t know how big a difference this really makes — I’ve read articles saying it’s a miracle move that will increase your refrigerator’s efficiency by umpteen percent and/or keep it from burning your house down and killing you, and I’ve read articles saying it’s a total waste of time that won’t make any difference at all. The EPA says it’s a good idea, at least for older models, so I gave it a shot.

Couldn’t hurt. Might help. Either way, it was a good excuse to buy a pointy brush suitable for retrieving the wayward cat toys and dog biscuits that seem to find their way into otherwise unreachable locations.

The hardest part of the whole project was cleaning off the top of the fridge so I could pull it out from the wall without knocking anything off. (You probably don’t want to know what’s up there.)

I couldn’t remember whether the coils were on the back or the bottom of our refrigerator, so I started by running the brush underneath it just to be sure. No coils, but I extracted an impressive quantity of dust, dog hair, and cat kibbles. Bleah.

Once I’d cleaned underneath, I pulled the refrigerator out from the wall, got on a stepstool, and ran the brush down the back to clean both sides of the coils.

They weren’t terribly dirty, but cleaning them wasn’t terribly hard, either, so I’ll file this one under “probably worth the effort.” Our refrigerator is less than three years old, but if yours is an older model, I’d upgrade that assessment from “probably” to “definitely.” At worst, you’ll have a cleaner kitchen.

When I bought my Marshmallow couch a few weeks ago, my only real misgiving was Walter. The world is Walter’s obstacle course, and he spent most of his time lying on the back of our old couch, looking out the window or supervising the goings-on in the living room, so with visions of snagged leather dancing in my head, I set about trying to create a more suitable perch for him.

Forty bucks later, I came home with 10 lbs. of birdseed and a carpet-covered perch just the right height for him to use for birdwatching. I hung a birdfeeder from the front porch, removed the bubble wrap from the window to give him an unimpeded view, and set the perch next to the window.

He was wary at first, but once he figured out how to jump up on it, we couldn’t have kept him off of his perch if we’d wanted to.

Now our only problem is cleaning the hair off the carpeted surface. This cat sheds like — well, a cat — and it takes four or five layers of lint-roller tape to clean a perch the size of a notebook.

I’m not fond of wasting disposable materials at that rate, so I got on Pinterest to see how other pet owners had worked around this problem.

Rubber gloves, as it turns out, are great for removing pet hair from furniture. Put them on, rub your hands over the upholstered surface, and the friction does the rest. Two minutes of that treatment on Walter’s perch, and I came up with this:

Five minutes later, the whole perch — top, base and scratching post — was clean. File this one under “Pinterest win.” (Now I just have to find an equally effective means of getting the dog hair out of the office carpet. I’ll be testing a technique for that soon, too.)

Here’s a cheap, easy timesaver for you, gleaned from one of those Pinterest-clickbait listicles. I’m not sure where the idea originated, as several variants on it have been making the rounds for a while, but the upshot is that you fill a dish wand with soap and vinegar, hang it in your shower, and use it to wipe down the walls and fixtures after you shower, thus keeping soap scum at bay and obviating the necessity of scrubbing.

You will need:
Hook you can hang in or just above your shower
Dish wand
Vinegar
Dishwashing liquid

Install the hook. (Protip: Command hooks are worthless for this. I want to love them, but I’ve never had any luck getting the adhesive to work in humid conditions, and the inside of a shower is about as humid as it gets.)

Fill the dish-wand reservoir halfway with dishwashing liquid. Most of the Pinterest versions of this will specify Dawn, as if it has magical properties, but the brand really isn’t important. I think we used Costco’s eco-friendly store brand, but whatever you have on hand is fine.

Fill the reservoir the rest of the way with vinegar (either apple-cider vinegar or plain distilled will work), screw the cap on, and shake it up.

Hang the dish wand from the hook. Before you step out of the shower each morning, give the dish wand a good shake and use it to wipe down the inside of the shower while it’s wet. Takes about 30 seconds and knocks down the soap residue before it has a chance to dry and leave a film on everything in the shower. Not bad for something that costs less than $5 and takes maybe 5 minutes to throw together. 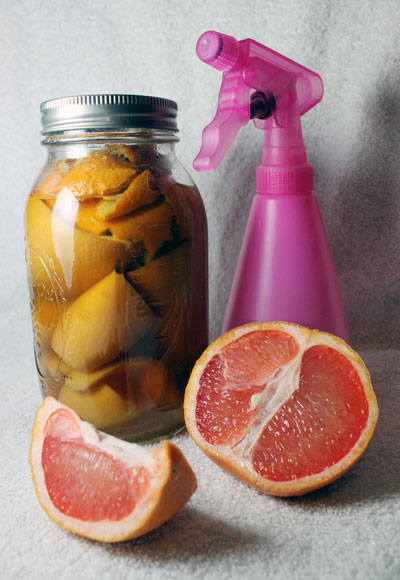 I use vinegar to clean almost everything. I don’t mind the smell, but then again, I’ve been known to order Pickle Pops by the case. Some people balk at using vinegar as a household cleaner, because the smell can get a little intense.

You will need:
A good-sized jar with a lid
Distilled vinegar
Citrus peels

Cut up the peels into manageable chunks. Roll up each piece of peel as tightly as you can, shiny side out, and put it in the jar. (Rolling causes the pores of the outer skin to release citrus oil, which is the key ingredient in those pricey biodegradable cleaners you get at the health-food store.)

Cover the peels with distilled vinegar, close the lid tightly, and let it sit on the counter. Add peels as you get them. Every time you add some peels, add enough vinegar to cover them. Any kind of citrus peel will work — orange, lemon, lime, grapefruit, etc. I bought a juicer recently and caught a sale on grapefruit, so I had a lot of grapefruit peels handy. I also had some Clementine oranges and a lime, all of which went in the jar.

Let the jar sit for at least a week after the last addition of vinegar. The longer it sits, the more it will smell like citrus instead of vinegar.

Strain the vinegar into a spray bottle and use it as you would Windex, Formula 409 or similar multipurpose cleaners. The peels can go in the compost pile. (Unless you’re vermicomposting, of course. Citrus and vinegar are both too acidic for worms.)

Ceramic cooktops are pretty. In the showroom. Where nobody has actually used them. In a kitchen where they get daily use, ceramic cooktops are a pain in the arse, because every time a pot boils over or something gets spilled, it chars a ring around the burner that won’t come off with ordinary cleaning, and you can’t just scrub it off with a pot scratcher, because you’ll scratch the stove. Gaaaah!

Fortunately, baking soda and a moderate amount of elbow grease will take care of the problem without destroying your skin or the cooktop.

For this project, you’ll need:

Start by spritzing down the cooktop with water.

Sprinkle baking soda over the dark rings around each burner. Lay a rag over each burner and spray it down with vinegar until it’s completely damp. The baking soda will fizz and bubble when the vinegar hits it. This chemical reaction will help loosen the charred mess that’s stuck to the burners.

Leave them on there for a half-hour or so while you go do something else, then remove one of the rags and take out after the rings with a Scotch-Brite pad and more vinegar as needed to keep the baking soda fairly wet and fizzing.

Wipe off the vinegar and baking soda, then wipe down the stove with a damp cloth to remove any residue.

The front burner you see above is the one on the right in the “before” picture below.

Feel free to gloat over your handiwork when you’re done.

You’ll have to scrub a little bit, but no more than you would if you used a commercial scouring powder, and this method is cheaper and easier on the environment.