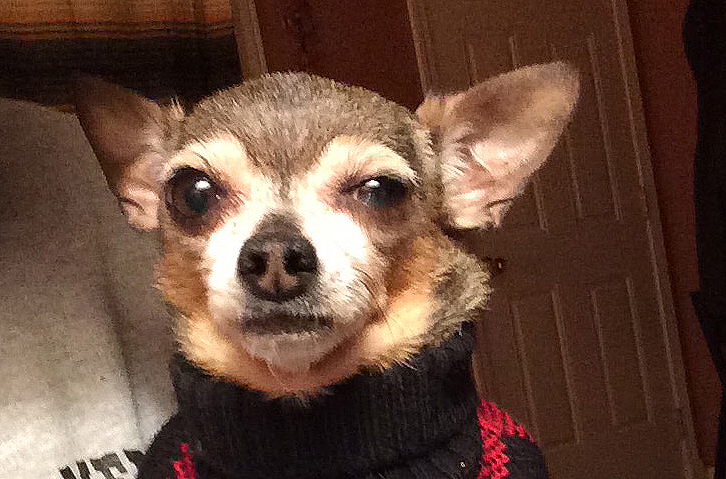 Lillian doesn’t like going outside when it’s chilly, so I put a little sweater on her to keep her warm.

I don’t know what to tell you, Lil. It’s gonna be a long winter.

I hate winter. HATE IT. With every fiber of my being. HAAAAAAAAAAATE it. This blog pretty much owes its existence to my profound and undying hatred of cold weather and gray skies.

I can think of only three things I hate more than I hate winter: crowded gyms, flavored coffee and the designated hitter.

That first one put me in a bit of dilemma yesterday. I had a five-mile run on my agenda, and my options were: A.) run in 25-degree weather, or B.) go to the gym and dodge all the newbies who don’t understand why there are separate lanes for runners and walkers.

I decided colliding with a wrong-way walker would be more unpleasant than fighting the cold for a few miles, so I sucked it up and headed out.

HOOOOOOOOHHHHHHHMAHGAH, that first half-mile sucked. Wire-rimmed glasses, for the record, are NOT comfortable at 25 degrees with a headwind. That metal conducts the cold straight into your face everywhere it touches. Two blocks in, I gave serious thought to turning around, but I really didn’t want to go to the gym in January, so I gritted my teeth and kept going.

By the time I got to the trail, the wind had settled down, I had settled into a rhythm, and I had one of the easiest runs of my life.

I still hate winter, but it does make distance running easier, and I wouldn’t be terribly upset if I had subfreezing temperatures to run in every Saturday morning between now and, say, the end of February.

In other news, I’m not the only one training in our house. Lillian, who is completely flummoxed by the concept of a leash, had a meltdown and wriggled out of her harness last night when I tethered her to my waist to keep her from sneaking off to steal cat food or poop in the floor, so I put Scout’s old choke collar on her and marched her around the house, making her sit every few minutes. She was outraged and had several good tantrums, jumping and flailing and fighting the leash, but bacon bits eventually calmed her down, and now we have a new routine: When we’re home, Lil is tethered to one of us. She hates it, but she’ll get used to how the leash and collar work eventually, and I predict all will be well in a few days.

As I mentioned the other day, we have a new baby at our house.

Well, not exactly a baby. She’s four and a half. But she’s tiny. And cute. And ridiculous.

Meet Lillian the Chihuahua, commonly known as “Lil Miss.” (Yes, Ron named her after the desk clerk in my novel, which you totally need to order if you haven’t already.) Lil also answers to “Get Your Face Out of the Cat’s Bowl.”

I’m pretty sure Lil is judging me.

Shady expressions notwithstanding, Lil is a sweet little dog, and she’s a quick study — I don’t think she’d ever been on a leash in her life when we got her, and she had a total meltdown the first time I put one on her, but less than 24 hours later, she had the hang of it and walked around the block just fine. She also had to learn about crunchy dog food (which she loves) and having her teeth brushed (which she hates so much she cries like a newborn baby and squawks like a crow every time Ron tries to do it).

I have no idea why I waited 35 years between Chihuahuas. They’re great entertainment, and marvelously portable: Lil went to work with me in a little sherpa bag for a couple of hours on Thanksgiving and just sat quietly on my lap while I designed pages.

In other news, the house looks terrific since I whipped it into shape so I could take pictures of it to send to Lloyd Kahn, the author of Tiny Homes, who is now working on a book about small homes. I’ll post some pictures one day soon.