Ah, what the hell — let’s start the new year by pretending I’m going to update this blog on a regular basis.

As I mentioned last summer, I’ve been researching Celtic folklore for a project I’ve got brewing. This mostly involved trips down online rabbit-holes while I was recovering from surgery, but in early August, an acquaintance heard me mention my project and brought me a stack of books on the subject. Before I had a chance to dive into them, school started, bringing with it some unexpected challenges. It was a deeply rewarding semester, but also deeply demanding, and I didn’t get a hand free to start my research in earnest until Sunday.

Three days later, I’ve skimmed four books, read two cover to cover, and gotten about two-thirds of the way through Patricia Monaghan’s fascinating The Red-Haired Girl from the Bog, which I highly recommend.

The project that prompted all of this is another novel that is simultaneously a prequel and a sequel to Greetings from Coldwater.

Here’s what I can tell you at the moment:

It is set in Coldwater and includes several familiar faces: Sierra, Miss Shirley, Joey, Abuelito, the denizens of the liars’ table at Casa de Jesus, and at least one other character I’ll keep to myself for now.

While Greetings was magical realism, this new book crosses the line into unapologetic fantasy. The new characters include a pair of banshees: Morgan, a lonely, awkward seventh-grader, and Holly, the middle-aged school administrator who becomes her mentor. We’ll also meet Holly’s girlfriend, an acerbic banker who is wholly unbothered to find herself dating, as she puts it, “an incarnation of an ancient Celtic spirit most Americans either haven’t heard of or don’t believe really exists.”

The story is more plot-driven than Sierra’s last outing, and while my intent is for Morgan to be the primary protagonist, I have four very strong characters on my hands, so there’s no telling where this thing will end up by the time I wrangle it out of my head and onto paper. At this point, about all I can say with any degree of certainty is that it’ll pass the Bechdel test with flying colors.

I forgot to do this earlier, but here’s the updated classroom reveal, featuring my tissue-paper truffula forest and IKEA leaf canopy, along with a few flourishes I’m pretty sure weren’t there when I did the first reveal.

Drop your phone in a charging pocket and come in!

Grendel’s arm hangs above the door.

The Lorax hides behind a truffula forest. 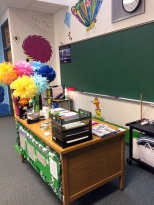 Piglet’s kite, the Lorax, and an old friend.

Snape casts his patronus atop a hobbit-hole.

My kids love that beanbag. 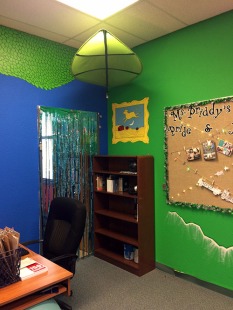 The day’s Common Core objectives go in the pockets.

Sunflowers on the table, just because.

The inflatable chair lasted about two weeks before it developed a leak. Disappointing, but I didn’t expect much for $5.

I can HIGHLY recommend the mermaid pillows, which have a soothing effect on kids and adults alike.

When we read <em>Beowulf</em>, my seniors thought it would be hilarious to have a plushie of Grendel’s arm hanging above our door like the entrance to Heorot, so of course I made them one.

The truffula trees were time-consuming but very easy; I’ll post a tutorial later if anybody wants one.

The bulletin board on the desk is made from old ceiling tiles.

The big leaf is a baby-bed canopy I picked up for $15 at IKEA. The balloon lamp is another IKEA find — $6, IIRC.

The lights on the “Pride and Joy” board are battery-powered fairy lights that came with little clothespins attached. I use them to display student work, school pictures, etc.

The shoe organizer is a cellphone parking lot. I stuck a power strip to the underside of the chalk tray next to it and plugged in chargers with extra-long cords to give kids an incentive to surrender their devices without a fuss.

The file pockets hold copies of the week’s Common Core objectives. I’ll share how I use them in a future post.

Not pictured: my beloved wax warmer, which makes my room smell like a cinnamon roll, thanks to dollar-store wax melts.

I wanted my room to feel like the children’s section at Barnes and Noble. It ended up being better. Elementary kids come in and hang out after school just because they like it. Colleagues wander in occasionally when they’re tense and need to unwind. Meetings are less stressful when I host them. I suspect part of the magic is that it allows people a safe space to be childLIKE, so they don’t feel the need to be childISH. 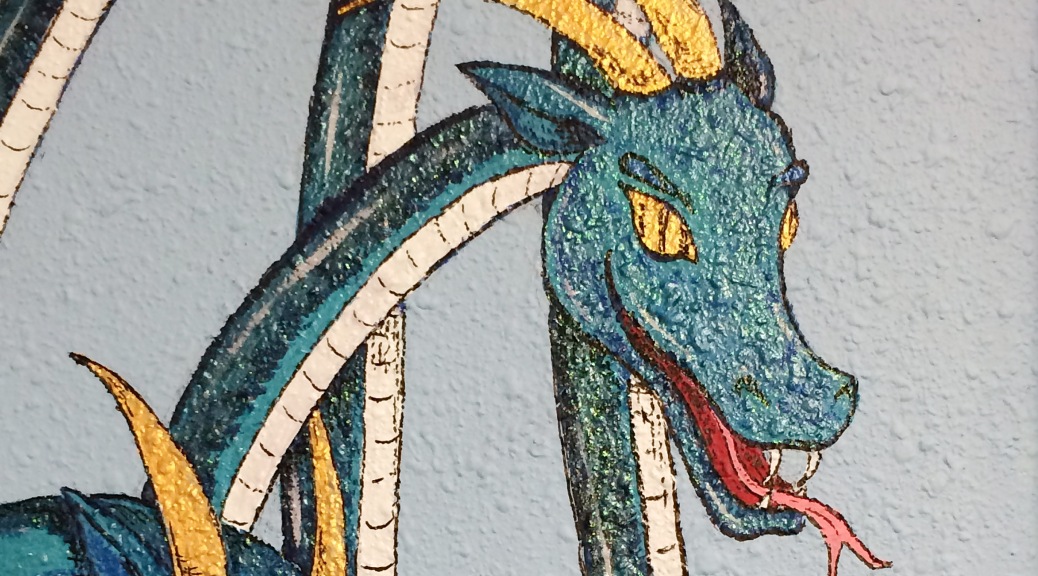 Sorry I’ve been so quiet all spring and summer. I’ve been busy — state testing, prom, honor society induction, professional development, graduation, finals, ducks (shoutout to our ag teacher for taking the noisy, destructive little SOBs off my hands), travel, side hustles, curriculum writing, and last but certainly not least, painting an elaborate mural on all four walls of my classroom.

I finally wrapped up the mural on Monday. It was a long process that began last spring, when I wandered into my superintendent’s office and asked how much trouble I’d be in if I painted literary characters all over the walls of my classroom. She basically gave me carte blanche and waited to see what would happen next. About 103 hours of actual work later, this was what I came up with:

I still have a truffula forest made out of pool noodles and tissue paper to mount on a particle-board stand, a couple of giant IKEA leaves to install near my desk, and a few more strings of fairy lights to hang on not-quite-finished bulletin boards, but I’ll post all that when I do an official classroom reveal in August.

My goal with this project is to remind my kids of how they felt about reading when they were little — back when they were exploring the Hundred Acre Wood and having wild rumpuses and sneaking through Hogwarts under an Invisibility Cloak instead of being assigned a million pages of stuff they didn’t really care about. I want to recapture some of that joy and maybe get them excited about reading again. We’ll see how it goes.

This work in progress will probably remain in progress for the foreseeable future, as I have a small part of a very large mural project booked for next weekend, but I’m hoping by the end of winter, I’ll have my bathroom finished. The faux-stone look isn’t difficult, but it’s time-consuming, and I’m having to piecemeal it as time allows — an hour here and a half-hour there.

I’ll post occasional updates on my progress so you can see the technique. If you like it, feel free to try it on your own wall. It requires more patience than anything else. When it’s all done, I might put together a tutorial. 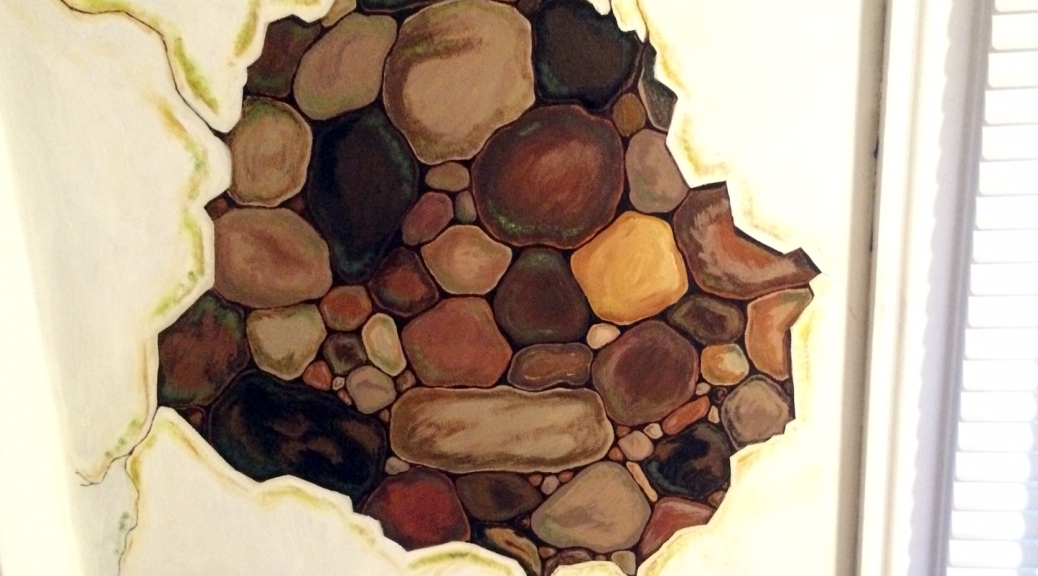 Longtime readers will recall my adventures in drywall repair last winter, necessitated by the slipshod home-improvement work done by the previous owner of this house.

The drywall in our bathroom was installed as poorly as the drywall in the rest of the house, and the paint job was even worse — drips and cracks and alligatored spots everywhere.

I could retape the joints, sand everything down, and repaint the walls in there with some textured finish that would conceal any flaws, but I’m not going to, for two reasons:

1. My projects earlier this year in the bedroom and office taught me that I haaaaaaaate working with drywall in tight spaces and rag-painting around obstacles.

2. I need a sample of trompe l’oeil mural work to show prospective clients, as most of my murals — with the exception of my faux-neon pieces — are done in a more cartoonish style.

With all that in mind, I decided to make the cracks in the bathroom wall look purposeful.

This is a work in progress, obviously, but here’s what I’m up to:

It’s not perfect, but neither is the wall. Intentional imperfections, rendered in careful detail, seem infinitely preferable to imperfections created as a result of someone’s sloppy attempts at home improvement, and hopefully the end result will be realistic enough to earn me another paying mural gig or two somewhere along the line.

I’ll post an update when I finish the project.

I’m not at liberty to reveal the full scope of my latest project, but I have another mural in the works. I’ve started working on the canvas sketches for client approval. I will, of course, post pictures of the finished project when it’s completed, which I expect will be several weeks from now.

In the meantime, here are a couple of details:

The guy at the top is an Amazon parrot. He won’t appear in the finished project, as he’s being replaced with a more colorful species (likely a scarlet macaw), but I think he’s cute, anyhow.

Following up on yesterday’s post, here’s another little project I did recently. The Blue Swallow Motel on Route 66 in Tucumcari, New Mexico — which we have long since established is my favorite place in the known universe — has a set of black cardboard information boards under the glass on the front counter. The boards have been in existence for as long as anybody can remember and provide information about other local businesses and services that might be of use to guests.

I’m not sure what was used to make the white letters on the boards, but it doesn’t respond well to spills, and despite the glass over them, moisture occasionally reaches the signs and smears the lettering. I’ll be in New Mexico soon to lead a motorcoach tour, do a few projects at the Swallow and spend a couple of days signing books at a festival.

The owner asked whether I could include restoration or replacement of the information boards among my projects. Based on the historic nature of the originals, we decided the best course of action would be to leave them as-is, remove them from harm’s way, and replace them with a set of updated boards featuring current businesses. Using paintmarkers and black poster board, I created these modern versions, designed to approximate the style and dimensions of the originals. The originals will preserved in some manner that maintains their historic integrity and protects them from further damage. I had the new ones laminated. Hopefully they’ll last as long as their predecessors.

I’m looking forward to getting to Tucumcari and starting work on the mural I’ve got planned, which will be something of a tribute to Bob Waldmire. I haven’t had a good dose of New Mexico since October, and I really need one. While I’m out there, I’ll be signing copies of Greetings from Coldwater and the new print edition of Route 66 for Kids, which has been updated for 2016. (There’s also a Kindle version of the guidebook, but it’s the 2015 edition. I haven’t had time to figure out how to update it and link it to the print version yet. The information is mostly the same, but a few places have raised their prices or changed their hours in the past year.)