OK … in the past 24 hours, I have rendered about 3/4 of a pound of beeswax, harvested peppermint, dehydrated peppermint, crushed peppermint for tea, packaged tea into small baggies, and bought materials to make beeswax lip balm and hand lotion. I’m hoping to make a batch of each in the next half-hour before Ron’s parents — who are in from Illinois this weekend — come to pick me up for dinner.

I would like to note, for the record, that I have great in-laws. Being longtime farmers, Larry and Phyllis did not hold it against me when they walked in this afternoon to find every surface in the kitchen (and most of the surfaces in the living room) covered with cucumbers, tomatoes, jars of honey, beeswax-covered containers, pickles, dehydrator parts, mint leaves, beekeeping equipment, canning jars, and various other objects that might lead the average urbanite to believe that I hadn’t cleaned the house since the Carter administration.

Larry and Phyllis recognized at a glance that we are simply in the middle of a very productive season, and the hyperactive-FFA-convention-on-speed look should in no way be considered a reflection on my housekeeping skills, because every single bit of apparent clutter is actually a critical part of some project that has to be done right this minute because Mother Nature says so.

UPDATE: I made peppermint lip balm before Larry and Phyllis got here. It turned out so well that I gave Phyllis a little container of it to try. We went out to Las Americas for dinner (tripas tacos … mmmm) and then headed over to the fairgrounds to watch part of a horse show and wander around the buildings for a little while. When I got back, I dried the rest of the peppermint and made a double batch of natural honey lip balm and two kinds of hand lotion. The lip balm turned out really well. The lotion is nice, but it’s a pretty unappealing color, so I won’t be selling any. We’re going out for chicken-fried steak and visiting the Tallgrass Prairie tomorrow, which should be fun.

Here’s another one I can cross off the 101 Things list:

I created a Podcast about our latest adventures in beekeeping. For some reason, the “play” link doesn’t seem to want to do anything (possibly because of high Web traffic?) but the download link works just fine.

If you have trouble getting the Podcast, I also uploaded the movie to YouTube:

Not bad for a girl who still listens to Neil Diamond on vinyl, eh? 😉 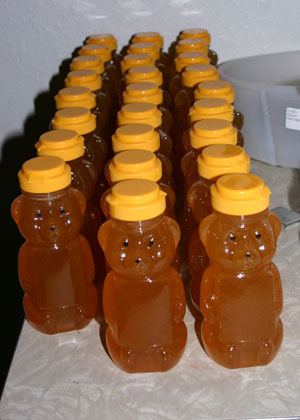 We harvested, extracted, and bottled honey today. I have tons of video of the process, but it will be a while before I get it all edited and spliced together into something resembling a coherent Podcast. We harvested 10 frames. The photo above shows the first six frames’ worth of honey. The new extractor worked very well. Every surface in our house seems to be coated with honey at the moment, but it’s worth it.

I’ve spent a lot of time working in the kitchen lately, processing things I’ve harvested from the garden. Last night, I made a batch of pickles: 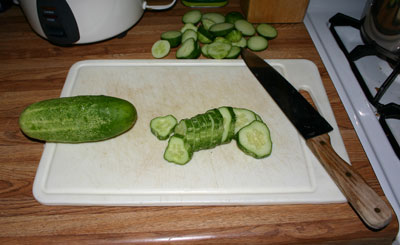 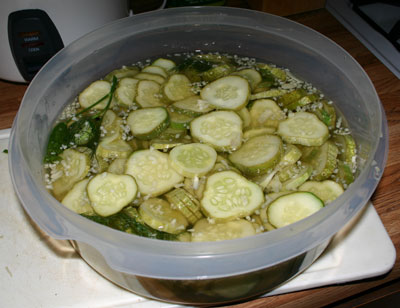 This pickle recipe is a slight variation on one my mom’s friend Dana gave her. I’ll post it later. 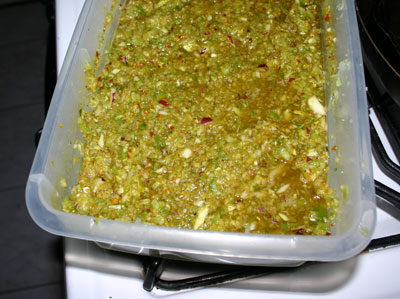 All the cucumbers that had gotten too big and ripe to use for pickles wound up being turned into relish. I don’t normally eat much relish, but I think this stuff is straight-up awesome. I made the recipe up as I went along, based on three or four recipes I’d seen online and a few of my own ideas about what I’d like on a hot dog.

Place remaining ingredients in a deep saucepan and bring to a boil over high heat, stirring constantly to keep sugar from burning. Stir and boil liquid until its volume decreases by about a third. Remove from heat. (You could probably shorten the cooking time here by simply using less water to start with.)

Place drained vegetables in a large bowl. Stir syrup into vegetables. Pack in small jars and process for 15 minutes in a boiling-water bath. Makes about six pints.

After all our hard work the past couple of days, we rewarded ourselves tonight with a trip to the Performing Arts Center downtown to see The Phantom of the Opera. I’d already seen Phantom two or three times in St. Louis, but Ron had never seen it. The performers were all really good, and even Ron — who normally hates Andrew Lloyd Webber — enjoyed it.

Hope your day was as good as mine.

1. I’m a fourth of the way through my big project for work. Since Zaphod isn’t expecting me to have it done for at least another month, I’m in good shape. I expect to have at least a third of it finished by the time he gets back from vacation, which should make him happy. I’d hoped to do the whole thing by Wednesday, but I can’t get all the information I need by then.

2. Ron and I are almost finished updating our share of the Dining and Lodging Guide, which we have been working on for two days. Another day should see us clear on that.

3. We added a second hive body to the newer beehive in the backyard yesterday. The first was completely full and covered with burr comb on the top. This is the most productive year I’ve ever seen for honey.

4. We’re harvesting honey from our oldest hive tomorrow. I’m way excited about this, as we are test-driving the new extractor.

5. I have to start a batch of pickles this afternoon. I was planning to do my canning later in the season, but the cucumber vines had other ideas. Hopefully I can start the pickles now and let them work for a few days while I clear the rest of the really pressing projects off my plate.

Hope you’re having a productive day.