I didn’t have many New Year’s resolutions this year, but I did promise myself I’d do more hippie crap, because it makes me happy.

Here’s my first real effort in that direction: 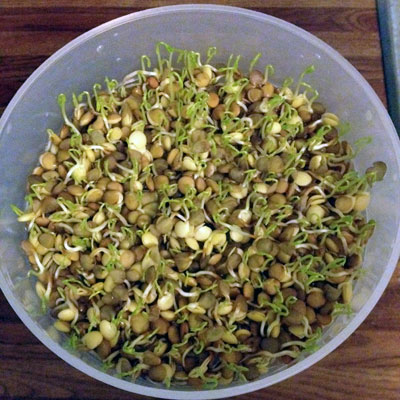 I ordered a sprouter before Christmas. It came in before I left for Tucumcari, but I didn’t start any seeds until I got home. I now have two trays full of alfalfa sprouts and a tray of lentil sprouts. I’m looking forward to eating them in salad tomorrow.

Sprouts are nice. They’re cheap to grow, and they taste like spring, which makes them especially nice in the middle of January.

As January evenings go, this one isn’t bad. I’ve got Emmylou Harris on Spotify, a cup of Wild Berry Zinger on my desk (sweetened with honey from our apiary, of course), and a design project in front of me. It’s not the ballpark on a hot summer evening, but it’s acceptable.

Speaking of the ballpark, Phillies pitchers and catchers report to spring training in 36 days. Eep!

People kept bugging me about it, so I finally joined Pinterest last summer. I don’t really get the appeal. Seems like an awful lot of effort just to bookmark a page. But people keep telling me how great it is, so I get on there every now and then to appease them.

Last month, I pinned a replacement part for my honey extractor.

A couple of weeks ago, I pinned a chainsaw.

Judging from all the shoes, sandy beaches, and low-carb dessert recipes I keep seeing on everybody else’s boards, I am pretty sure I am doing it wrong….

The Drillers lost Game 5 of the first round of the Texas League playoffs tonight, so baseball season is over, and fall has slipped into town behind a late summer storm.

I wasn’t ready for summer to end just yet.

So Ron and I went to the last regular-season fireworks night of the year tonight at OneOK Field. Drillers lost, but when the ushers handed out what they referred to as “3-D glasses” (which were more like taleidoscopes), inspiration struck. Prismatic film, as it turns out, makes a pretty sweet filter for an iPhone camera: 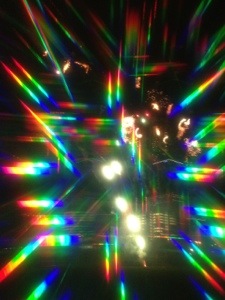 Bonus: Troy Tulowitzki and Jason Giambi were making rehab starts with the Drillers tonight, so we got to see a couple of big-leaguers play with our usual guys.

Hope your Friday was good, wherever you are.

Sorry for the extended silence; I’ve been unbelievably busy lately and just haven’t been able to work a hand free for blogging.

The calendar still says winter, but I think it’s officially spring in Red Fork. It’s been gorgeous out for the past couple of weeks, we’ve got a dove nesting on top of the pergola, the front yard is covered in little flowers (henbit, star chickweed, shepherd’s purse, spring beauty, and a few dandelions), the bee yard is busier than O’Hare International Airport, the Webster baseball team had its home opener this evening, and I bought half a flat of strawberries and a couple of Brussels sprout seedlings at Lee’s Feed the other day.

Most telling of all: The baby chicks are in at Lee’s. If somebody hadn’t already reserved all the Araucanas, I would have bought a couple to add to our flock.

I’ve got a fire in the woodstove, onion soup simmering on top, and bread bowls in the oven, and I’m getting ready to sit down with a sketchbook and a seed catalog to design the coolest herb garden in Red Fork.

Sometimes it’s good to be a hippie….

P.S.: Only 37 days until pitchers and catchers report to Mesa. Spring is on its way!

The weather this week has been gorgeous — highs in the 60s, dazzling sunshine, and glorious cobalt skies — so when school let out this afternoon, I pulled on shorts and running shoes and took Songdog out to the river for a three-mile jog along the trail.

It’s not quite as spectacular as Turtle Playground, but the giant frog next to the playground at River Parks looked so cool in that pre-sunset “magic light” that I couldn’t resist stopping to take a picture with my cell phone on the way past.

Songdog, for the record, was a perfect gentleman on the leash this afternoon — no pulling, balking, or bolting — and we had a really nice run. I know it won’t last, but it feels like spring out there right now. Pretty afternoons in January are rare and precious and always delight me.

Speaking of spring, I saw a fat robin sitting in the middle of the street on my way to school this morning, and we’re about six weeks from spring training. Cubs haven’t announced their reporting dates yet, but when pitchers and catchers arrive in Mesa, Carlos Zambrano will not be among them, because Ep & Co. just swapped him to Florida for Chris Volstad. I know Z has been a handful, to put it mildly, but I’m not keen on swapping a guy with a 3.60 ERA who bats .241 for a guy with a 4.59 ERA and a .133 BA. I am especially not inclined to make that trade now that we finally have some adult supervision in the dugout. That said, it should be interesting to see how Zambrano gets along with Ozzie Guillen. I figure they’ll either get along famously or tear each other’s heads off right in the middle of the clubhouse.

Hope your day was as enjoyable as mine.

Once again, I find myself apologizing for my silence. School started last Monday. I had a good week, but it didn’t leave much time for blogging, as I had commitments to attend to every evening and most of the weekend.

The fact that I am still conscious at this point may have something to do with the fact that I can see a soft blue light shining at the end of the tunnel.

My kids are watching Field of Dreams in class. Daydreaming New Mexico, I understand Moonlight Graham’s line: “Once a place touches you like this, the wind never blows so cold again.”

If I close my eyes, I can almost feel the hot, dry wind stirring the high desert air, twisting my hair into a mass of careless tangles, whispering peace and the land’s ancient incantations into my ear as I rest on an old metal lawn chair, drawing strength and inspiration from the eerie songs of distant coyotes and the familiar hum of neon transformers, storing New Mexico in dreams like mental Mason jars to open and devour when life becomes too complicated and I need the scents of pinon and sage and green chile and magic to drift through my mind like tumbleweeds and send my spirit soaring through a cobalt sky somewhere above a timeworn alignment of Route 66 in the land of Baca and Anaya and Hillerman.

My fellow Bleacher Bums, our long National (League) nightmare is over. Hendry is gone.

On a related note, the Cubs just beat the Cardinals 5-4 in the bottom of the 10th with an RBI single by Colvin.

Come on, Quade. You know what you did to get this job. If you do it again, you might just get to keep it. Do we still have enough games left to make up an 18.5-game deficit? Of course we do! Go, Cubs!

Technically, no one asked the hippie this, but it’s a popular question, and it came to mind the other day during a conversation about the relative value of various professions.

Q. Albert Pujols makes $14.5 million a year, and all he does is play baseball. Why aren’t teachers paid the same as professional athletes?

A. This argument comes up every time somebody mentions the subject of teacher pay, and it always makes me cringe, because I live in fear that some cynical politician will hear it and do the obvious.

Unless you honestly want to have another frustrating conversation about merit pay, you probably shouldn’t bring up ballplayers’ salaries. Alfonso Soriano notwithstanding, professional baseball is all about merit pay. If you understand how this concept works in baseball, you have a pretty good idea of why teachers’ unions oppose it.

Albert Pujols makes $14.5 million a year. He also has a lifetime batting average of .328, a .619 slugging percentage, two Gold Gloves, six Silver Sluggers, nine All-Star appearances, and a 10-year average VORP of 86.37. This is the baseball equivalent of walking into a Title I school and getting 95 percent of the kids to score at or above the 97th percentile on their End-of-Instruction tests for ten consecutive years.

Unless you are the Albert Pujols of professional educators, you can’t reasonably ask someone to pay you $14.5 million a year. But even ordinary Major League Baseball players are an elite group. If my numbers are right, at any given moment, the maximum number of MLB players is 1,200 — which means less than 12 percent of all professional baseball players are actually knocking down six figures or more.

Let’s pretend you’re a young, unproven teacher, fresh out of college. You’re drafted in the 20th round and sent to single-A. Your starting salary is $850 a month, which works out to $10,200 a year. If you play well, you could be promoted to Double-A ($1,500 a month) or even Triple-A ($2,150 a month), where you’ll still be making less than the current starting salary for teachers in 47 states. But hey — it’s worth it if there’s a chance you could get called up to the majors, where the minimum salary is $414,000, right?

Maybe. But who will be evaluating your performance, how well will they understand what you are trying to accomplish, and what kind of pressure will they be under to keep payroll expenses down? I have a great boss, but what happens if he quits, and his replacement turns out to be the Larry Himes of school administrators? Unlike MLB teams, school districts can’t raise revenue by selling tickets or licensing collectibles with the star player’s face on them, so even if you’re the second coming of Jaime Escalante, you’ll be lucky to get to The Show at all.

Welcome to merit pay, rookie. And quit that sniffling. There’s no crying in baseball.