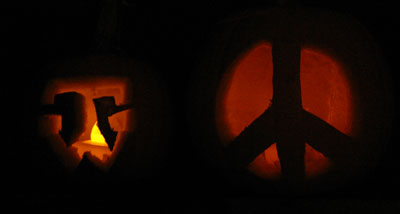 Our jack-o’-lanterns. The one on the left is a Webster High School logo. It looked better when I first carved it, but part of it started to sag as the evening wore on. I swiped the peace-pumpkin idea from my friend Trisha.

My weekend, by the numbers:

1:52:20: Hours, minutes, and seconds it took me to finish this year’s Tulsa Run. For the record, that’s nearly 11 minutes more than my last Tulsa Run, and over 21 more than my fastest. I’m woefully out of shape this season, so I have only myself to blame for my thoroughly abysmal time.
Three: Dollars spent on pumpkins at the church-run patch up the road.
Two: Number of jack-o’-lanterns I carved before the trick-or-treaters arrived.
Thirty-five: Approximate number of trick-or-treaters who showed up on our doorstep last night.
Five: Hours Ron and I spent cleaning the garage this weekend.
Seven: Number of cave crickets I killed while cleaning the garage.
One: Number of pickup loads of stuff we donated to Goodwill.
Nine: Number of contractor-sized garbage bags currently sitting on our curb.
Fifty-two: Ounces of soda necessary to rehydrate me after we finished cleaning the garage.
One hundred forty-nine: Number of trig problems I probably ought to work between now and 5:30 p.m. Tuesday.
Thirty: Number of trig problems I absolutely have to work between now and 5:30 p.m. Tuesday.
Zero: Number of trig problems I am probably going to work tonight.

Hope your weekend was as productive as mine.

After two years of unbelievably horrible service, my Sprint contract finally expired today, which means I finally got to cross No. 76 off my 101 Things list.

I couldn’t afford an iPhone contract, so I went to Verizon and had my number transferred to a cheap Motorola ($20 after mail-in rebate) instead.

My former Community World staffers will be pleased to learn that if any of them calls me, my new phone will play the official theme song of 8110 S. Harvard.

My plot to make my own one-of-a-kind ringtones was foiled by technological deficiencies, so I wound up having to settle for Verizon’s more conventional offerings. This means that my phone will NOT be playing “Zaphod Beeblebrox for President” every time my boss calls. I did, however, find a suitable alternative….

I just e-mailed off the information for our sections of the latest Route 66 Dining and Lodging Guide. This means I can finally cross item No. 7 off my 101 Things list.

I’d post more, but I’ve had a long, busy day, I’m exhausted, and I have to be in midtown at 8:30 a.m. for some training. Life is extremely busy but very, very good.

I finished item 87 on my 101 Things list: Update Route66motels.com and fix any messed-up links.

My next big goal is to finish item 2: Finish reading Prose Works. I’m pretty close, but I haven’t had time to read much lately because I’ve been so busy with work and bees and a dozen other projects. I’m hoping I’ll have some time to study this weekend.

Here’s another one I can cross off the 101 Things list:

I created a Podcast about our latest adventures in beekeeping. For some reason, the “play” link doesn’t seem to want to do anything (possibly because of high Web traffic?) but the download link works just fine.

If you have trouble getting the Podcast, I also uploaded the movie to YouTube:

Not bad for a girl who still listens to Neil Diamond on vinyl, eh? 😉

I caught myself slipping into a bit of a funk the past couple of days. I think the erratic sleep patterns, extended travel, and emotional roller coaster of the last three months finally caught up to me, and I could feel myself starting to crash, mentally and physically.

After indulging in one too many naps, I decided it was time to snap out of it, so I sat down Thursday and accomplished something. Several somethings, in fact. Between 7 a.m. and 1 a.m., I:

1. Finished up item #65 on my 101 Things list.
2. Wrote course descriptions for eight classes I want to include in the journalism curriculum at Webster High School. Ten years ago, I abandoned my career in education after a nightmarish challenging year babysitting gang members teaching English at a hellhole high school in St. Louis County. Three months ago, my journalism career abandoned me. In mid-April, the Webster principal presented me with an intriguing opportunity to revive both careers at once by joining the Webster faculty as journalism strand coordinator for their new magnet program. We start writing curriculum in a couple of weeks. I’m so excited I can hardly sit still.
3. Designed a planner/calendar/Control Journal that will hopefully help me stay focused and organized as I start my new job.
4. Ate dinner at my Emergency Backup Haunt: Al’s Route 66 Cafe in Sapulpa. It’s not the Rock, but it’s certainly an acceptable replacement while I wait for Dawn to rebuild … and it has the dual advantage of being much closer to home and much less fattening. (My favorite thing at Al’s is the tuna-salad-stuffed tomato with a side of cottage cheese. My favorite thing at the Rock is the chicken-fried steak with a side of deep-fried pickles….)
5. Cleaned the bathroom.
6. Cleaned the kitchen.
7. Cleaned the living room.
8. Sorted and organized the magazines that were cluttering up the shelf under the coffee table.
9. Started a load of laundry.

Not bad for a girl who was so tired she had to take three naps and then go to bed at 9 p.m. yesterday. 🙂

Rather than put up one ginormous post containing all the highlights from the past two weeks of my life, I’m just going to Photoshop a few images at a time and post them for your entertainment.

From the “wish I’d thought of that” files: 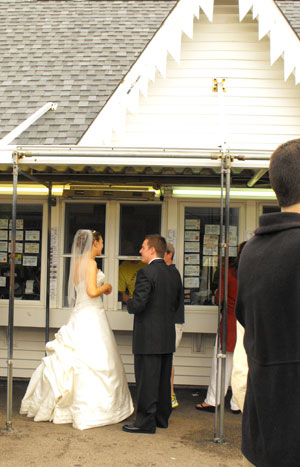 Four — count ’em, FOUR — wedding parties showed up at Ted Drewes’ Frozen Custard on their way to their receptions Saturday afternoon. If I’d known about Route 66 and Ted Drewes’ when Ron and I got married, I’d have held our entire reception at Ted’s … and probably the ceremony, too. Because, really, why settle for wedding cake when you can have a Dutchman concrete, and why settle for a church when you can have Route 66?

This beautiful Bernese mountain dog and its owner were hanging out at Ted’s while I was waiting for Kate. Somehow the dog reminded me of someone I know: 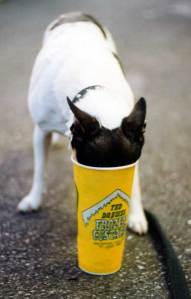 My real reason for being at Ted Drewes’ on Saturday was to meet Kate — practitioner, blogger, Folk Thursday supporter, bee admirer, and all-around great girl: 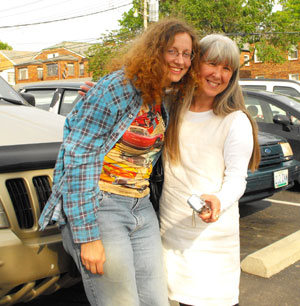 I’m back in Red Fork after 15 days on the road. There were a couple of people and places I didn’t get to visit while I was in Illinois (sorry, Kris … by the time I got a hand free, the tornado sirens were going off, but I promise I’ll call before you make your mad dash across the Mason-Dixon line), and I got a bit or two of news I could have done without, but overall, it was a good trip, and I’ll have lots of photos and stories to share once I’ve caught my breath and decompressed a bit.

In the meantime, I will just note that the break-in period on a Honda Fit is apparently 9,000 miles, because once I hit that, I started averaging 40+ mpg; my record for the trip (and my personal mileage record for non-hybrid vehicles) was over 42.5 mpg. I topped 42 while driving through the Ozarks — on a tank of that wretched ethanol blend they sell in Illinois, no less. I have no idea how that happened. I wasn’t even driving for mileage. I think my car finally figured out I wasn’t joking about that threat to swap it for a ’65 Ghia if it didn’t straighten up…. 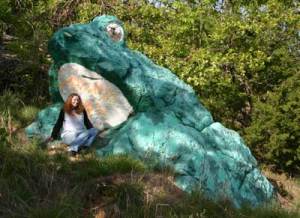 It’s not quite the Old Man of the Mountain, but if you happen to be in northeastern Oklahoma, this big stone frog west of Mannford makes a pretty good excuse for a Sunday drive and a silly photo op. (And if you’re playing along at home, that’s 55 down and 65 to go. I’ve gotta rustle up a freelancing gig to pay for some gas and motel rooms so I can devote an entire week of my recently-freed-up summer to finishing item No. 64 on my 101 Things list….)

I had occasion to carpool to Springfield, Mo., today with some friends. On the way back — somewhere between Bois D’Arc and Halltown — one of them decided she wanted some ice cream.

I happened to know that the best Route 66 soda fountain this side of South Pasadena was just up the road in Webb City, so we got off the interstate at our earliest convenience and headed for the Bradbury Bishop Deli.

My friend Donna and I enjoyed our smoothies at Four Women on the Route. 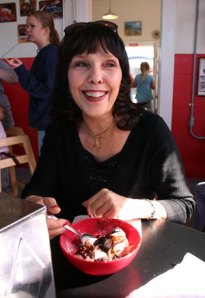 Our friend Jana — whose ice-cream craving inspired this side trip — had a bowl of warm brownie bites with two scoops of ice cream melting on top. Mmmm…. 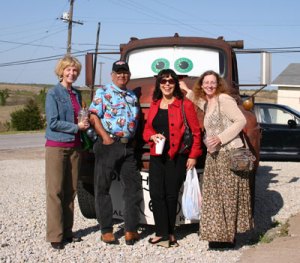 Dean “Crazy Legs” Walker gave us a partial demonstration of his famous foot trick while we posed for a photo op in front of “Tow Tater.”

Predictably, I didn’t have my camera out for the most memorable moment of the afternoon — the moment when the First Lady of Country Fiddle exchanged autographs with the man whose feet inspired Mater’s driving-backwards trick.

I did, however, have my camera out yesterday afternoon, when a trip to Catoosa in search of pond plants degenerated into a pointless drive down 66 to Afton. I started to come back by way of the turnpike but made a last-minute decision to take the Big Cabin exit when I noticed a construction zone looming ahead. I wound up taking U.S. 60 from Big Cabin to Nowata and then dropped south on 169 back to Tulsa, bagging photos of two more Roadsideamerica.com attractions in the process:

Bowling ball madness in Nowata. A small, handmade sign that reads “BOWLING BALL YARD ART” directs travelers off U.S. 60 and onto a somewhat rugged backroad to find this bit of folk art. 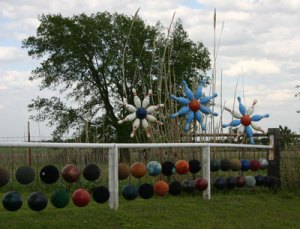 Oh … and for the record, that brings my tally to 54 down and 66 to go on that list of attractions for Oklahoma.

Hope you’re enjoying your weekend, too. 🙂