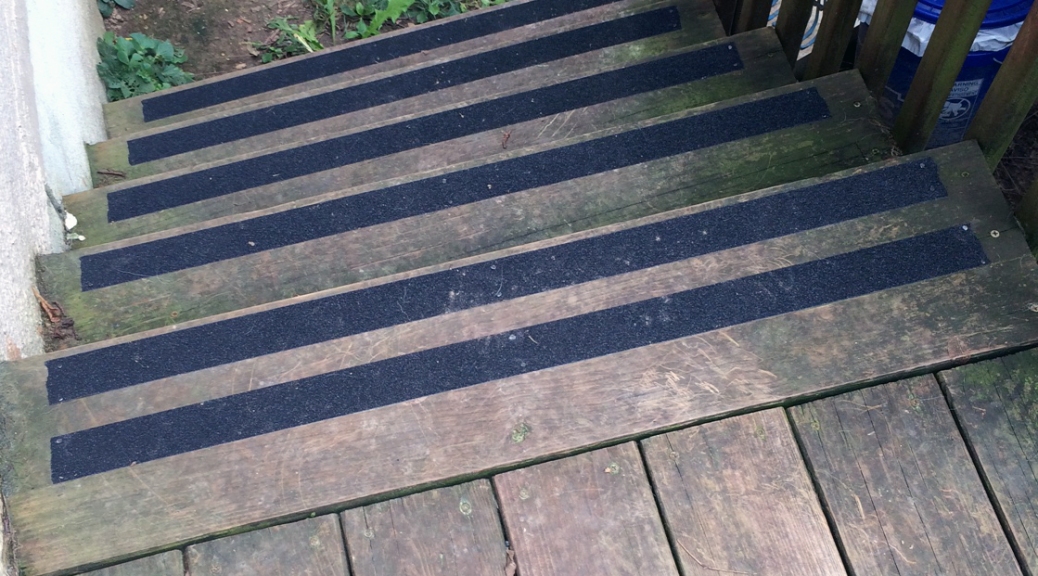 This isn’t so much a “make-it” project as a “buy-it-and-install-it” project, but it was cheap, quick and might save us a few bucks on vet bills and insurance deductibles, so I thought I’d post it anyway.

Several months ago, Ron hit a slippery spot after a rainstorm and fell on the steps leading from our deck to the backyard, earning himself a nasty bruise in the process.

He wasn’t the only one who found treated lumber just a little too slick to negotiate safely after a rain; during a particularly wet period this summer, we noticed our aging collie mix, Songdog, stepping gingerly and occasionally slipping, so the next time I was at the hardware store, I picked up some tread tape and a package of tacks and set about making the steps a little safer for my boys.

The finished project would have looked a little neater if I’d cut the strips to length instead of tearing them, but I didn’t want to dull my scissors cutting tape with the texture of sandpaper. If you’re particular about such things, you could probably use a utility knife with a disposable blade to make a neater edge.

Riggy wasn’t impressed (lacking eyes, he navigates the world with his nose, ears and paws, and he doesn’t like it when familiar paths suddenly feel unfamiliar under his feet), but I’m sure we’re all safer, and even if he refuses to set a paw on the strips, they slow him down and force him to think about what he’s doing, so he’ll be less likely to slip when he comes charging in for dinner or cookie time.

You can buy narrow tread tape for about $1 a foot at most hardware stores; wider tape will run you a little more. I think the stuff I used was about two inches wide and came with a self-adhesive backing that I spent about 15 minutes reinforcing with tacks just to be sure it stayed put. Cheap, easy project, and one I highly recommend if you’ve got outdoor steps that are prone to get a little slippery in wet weather.