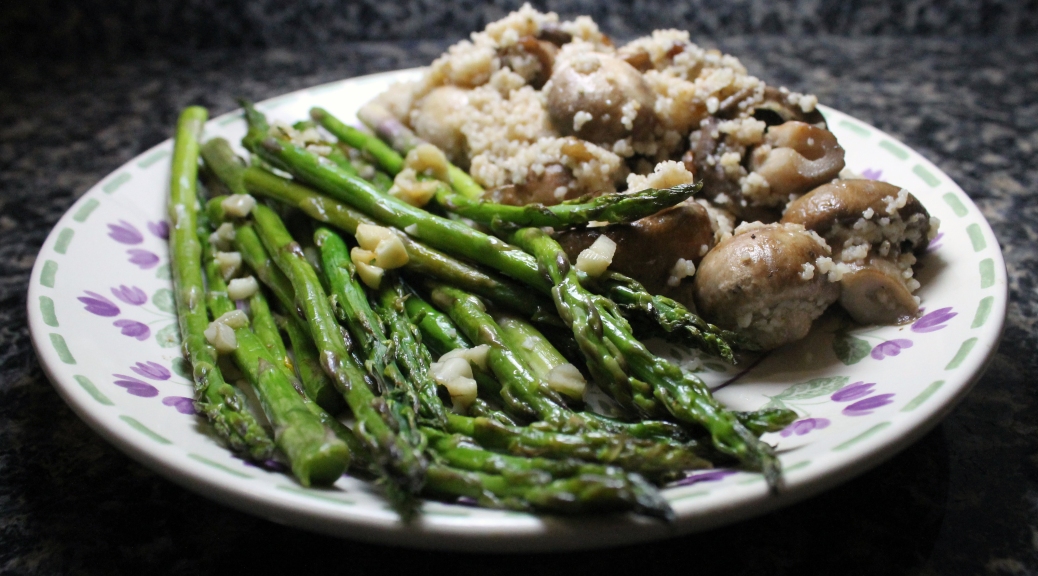 Yes, I know we just talked about asparagus and mushrooms a couple of weeks ago. I enjoyed that batch of pasta so much that I bought another round of ingredients with the intention of making more, only to realize I was out of linguine. Undaunted, I found some couscous in the cabinet and went another direction that’s probably a little more health-conscious. Consider this one a two-fer.

Preheat oven to 425 degrees. Arrange asparagus in one end of a large baking dish. Drizzle with olive oil and water and sprinkle with garlic.

Arrange mushrooms in the other end of the dish. Drizzle with olive oil and sprinkle with garlic as you did the asparagus.

Oven-roast until the asparagus is bright green and tender and the mushrooms turn dark and start to shrink a little. This will take about 15 to 20 minutes, depending on your oven.

While vegetables cook, combine couscous and water in a microwavable dish with a lid and nuke, covered, for 5 minutes. Let stand 5 minutes and fluff with a fork. Toss with butter, chopped nuts and roasted mushrooms and serve with asparagus.

P.S.: Here are days 19-24 of my Lent project. I figured you were tired of T-shirt pictures, so I just stacked them all up in a single shot.

This week’s Eco-Saturday is less a suggestion than a rant masquerading as a question:

Why are razor companies going out of their way to trash the environment as fast as they can go?

I would like very much to minimize the amount of trash we generate around here, and I’ve taken many steps to that effect, most of which I’ve shared on this blog. But I shouldn’t have to take out a second mortgage on the house to accomplish that.

A package of eight cartridges designed to fit Gillette Sensor razors retails at $22.29; two packages of four disposable Sensor razors will set you back $14.78. The same dynamic holds true for women’s razors, albeit usually in a less dramatic fashion: $17.49 will buy you five Venus replacement cartridges or six whole disposable Venus razors.

WTF, Gillette? You can’t tell me it costs less to make a whole razor than it costs to make a razor cartridge. Not when the design is virtually identical, and the cartridges use less material.

I thought I’d found a workaround a while back, when I picked up a package containing a Bic razor and several refills at a reasonable price. Then I got the damned thing home, opened it up, and found out Bic does not sell refills independently of the razors, so you’re still tossing it out and buying a new one way more often than necessary.

I’m not keen on trashing the planet or rewarding companies for implementing a price structure that actively discourages environmentally responsible behavior, so I did a little online research to see what it would take to tell Gillette to kiss my arse.

About $30. That’s what it costs for an old-fashioned safety razor and a pack of five blades.

At worst, if I can’t figure out a safe way to recycle them, I’ll be throwing out one very small piece of metal every couple of weeks. Contrast that with the Bic semi-disposable I’ve been using lately: 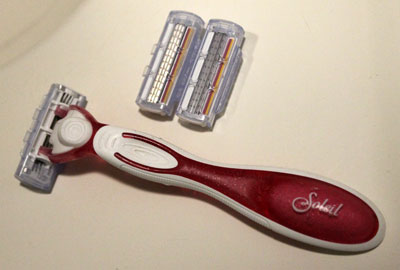 No contest — especially when I can buy 100 replacement blades for $9, and they come wrapped in tiny slips of paper I can toss in the recycler when I’m done.

I’ll try to remember to do an update once it comes in and I get a chance to use it and determine whether it’s as good a product as I’m hoping it will be.

As usual, my week got away from me. I’ll do an Eco-Saturday and a catching-up-on-Lent post shortly. In the meantime, here’s a good recipe for a quick meal on a busy night. Not exactly health food, but probably better for you than the version you’d get at a Mexican restaurant, and it comes together easily. I’ve listed amounts only for the refried beans (which double easily if necessary) because the amounts depend entirely on your personal taste and the number of people you need to feed.

Saute the onion in olive oil until clear. Add pinto beans, tomatoes and taco seasoning to taste and mash together. Cook, stirring frequently, until thick and bubbly.

Mash avocado. Stir in a couple of tablespoons of salsa, a tablespoon or two of lime juice and a healthy sprinkling of taco seasoning.

Layer tortilla chips, a scoop of beans, and a handful of cheese on plates. Microwave each plate 20 seconds to warm the chips and melt the cheese. Top each plate with salsa, guacamole, sour cream and olives and serve immediately.

If you want an extra protein boost, stir some taco seasoning into a handful of frozen TVP, microwave until hot and layer between the beans and cheese.

Not quite the same as Del Taco’s “Macho Nachos,” but probably as close as I’m going to get between now and my next vacation.