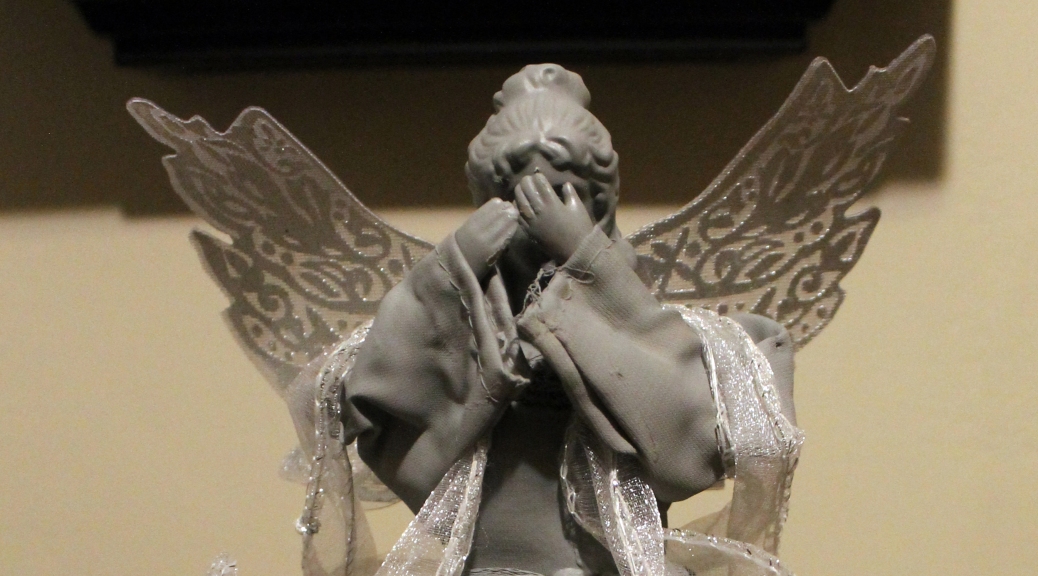 We have a Christmas tree at our office.

Our office Christmas tree does not have a topper.

I do not have any act-right.

The dollar store near our office is selling treetop angels for $3.

So, obviously, this had to happen:

I couldn’t help myself. Really, I couldn’t. The reporter who sits behind me is a Whovian, as are two copy editors, all the IT guys and at least one person in advertising. And that empty spot at the top of the tree is just begging for a worthy decoration.

Besides, somebody already brought in one of those Elf on a Shelf things, and they’re at least as terrifying as the Weeping Angels. If you don’t mind a voyeuristic elfin ratfink carrying out covert espionage operations all over the office from Thanksgiving until Christmas, you shouldn’t be fazed by a quantum-locked assassin masquerading as a divine emissary.

I suspect the Elf on a Shelf of being a Weeping Angel in disguise anyway. I mean, it does seem to be quantum-locked, and we are advised not to touch it.

Come to think of it, that’s a little unnerving. The prevailing theory among Whovians is that Santa is a Time Lord, because he doesn’t age, he doesn’t die, his bag is obviously bigger on the inside, and the only thing that could manipulate time and space efficiently enough to allow for several billion deliveries in a single night is a TARDIS. (Evidently his doesn’t have a functioning chameleon circuit, either, since it always looks like a flying sleigh, which is almost as inconspicuous as a flying British phone booth.)

I can think of only one Time Lord whose ethical standards would be so dubious as to allow him to infiltrate children’s homes with poorly dressed Weeping Angels.