We love road trips. Mother Road, Loneliest Road, Pacific Coast Highway, Devil’s Highway, Lincoln Highway, Blues Highway, Great River Road — you name it, we’ve probably driven part of it. We don’t fly to our destinations. We drive, because the journey is half the fun. More than half, actually, and you miss a lot of kitsch when you fly over it.

We couldn’t afford to drive all over creation if we didn’t choose our vehicles wisely and care for them properly.

Here are some quick tips to boost your gas mileage:

1. If you’re considering a new car, look for the most fuel-efficient vehicle that meets your needs, and don’t let Madison Avenue talk you into buying something bigger or fancier just to keep up with the Joneses.

2. Keep an eye on your gas mileage. It’s easy to do: Just reset your trip odometer the next time you fill your tank. Then, each time you refill the tank, divide the number of miles on the odometer by the number of gallons it took to refill the tank, then reset the odometer again. Do this every time you fill up, and you’ll be able to tell right away if your mileage drops or rises suddenly. In addition to giving you an idea of how various conditions affect your gas mileage, this will give you a heads-up about mechanical problems. A sudden drop in gas mileage can be a signal that something is wrong under the hood, and it probably warrants a trip to the dealership to see what’s going on. A lot of problems are cheaper and less hassle to fix if you catch them early.

3. Check your tire pressure. Underinflated tires will drag down your gas mileage.

4. Replace your air filter regularly. A dirty air filter can compromise your mileage.

6. Ditch the flag. There’s nothing patriotic about sending more money to foreign oil producers, but that’s exactly what you’re doing when you attach flags to your car. A flag mounted to a car’s window or antenna acts as a sail, adding drag and increasing the amount of energy it takes to propel the vehicle forward. If you want to show your patriotism or your team spirit, do it with a bumper sticker or a custom paint job — not a piece of fabric that’s knocking down your gas mileage.

These aren’t the only ways to boost your car’s fuel efficiency (I’ll get into “hypermiling” — mileage-boosting driving techniques — in a future post), but they’re quick, easy and can make a significant impact with minimal effort.

French silk pie is one of the greatest things ever invented. It’s also a ginormous hassle to make and involves raw egg, which isn’t the safest ingredient out there. This three-ingredient variation is faster, safer and completely vegan. W00t!

I’m including two variations here. The first is light, fluffy and virtually indistinguishable from its egg-based inspiration. The second is much richer and heavier and has a texture more like fudge. Both are worthy additions to a Fourth of July picnic or an office potluck.

If using a regular piecrust, pierce it all over with a fork and bake it before you start. You can skip this step for a graham-cracker crust, obviously.

Melt chocolate chips. I did mine in a quart Mason jar, nuking for 30 seconds at a time and stirring in between.

Put chocolate chips, tofu and vanilla in a food processor or blender and process until smooth and completely blended. Pour into pie shell and refrigerate for several hours.

If you’re considering buying a new refrigerator, do something for the planet first: Walk into your kitchen, open your current fridge, and throw away everything you do not honestly intend to eat. If you’re anything like us, by the time you finish tossing all the jars with one pickle slice floating in them, condiments you’ve tried but didn’t like, and Tupperware containers full of freezer-burned leftovers that have been there since the Carter administration, you’ll probably be left with, like, half a jar of mayonnaise and a six-pack of beer.

With your inventory of inedible crap gone, go to the grocery store, buy a week’s worth of groceries, and look at the space it takes up. That’s the amount of space you actually need. Don’t buy more than that. You’ll just end up paying to cool empty space.

Generally, the smaller the refrigerator, the less energy it uses. There is a point of diminishing returns (a dorm fridge will suck almost as much power as a 12-cubic-foot model), but in general, smaller is better for the planet and your pocketbook.

If you have a big family, and you really need a big refrigerator, insist on an Energystar model — preferably one with the freezer on the bottom. This is not only handy, but it’s also more energy-efficient: Cold air sinks, so it makes sense to put the coldest part of the appliance on the bottom.

If you’re not ready to buy a new refrigerator, but you’ve got a lot of empty space in your current one, fill a few plastic jugs with water, freeze them, and use them to cool things down so the compressor doesn’t have to run as often.

One more thing: You may have noticed in the picture above that our fridge has scribbles on the front. That’s because I use it as a dry-erase board/instant grocery list. I just keep a magnetic dry-erase marker on the side and use it to jot things down as we run out.

When I’m ready to go to the story, instead of transcribing the list (which wastes paper, ink and time), I just take a picture of it with my iPhone and set it as my lock-screen wallpaper. Ta-da! Instant shopping list, and I save a tree. Or at least a couple of twigs.

Tabouli is a Lebanese salad made from parsley and bulgur wheat. It’s lovely stuff, but bulgur can be hard to find in a lot of areas, and it takes forever to prep, because you have to boil water, pour it over the dried wheat and then soak it for at least 20 minutes. You know the level of effort I like to put into dinner, and that is way beyond my upper limit.

Solution: Whole-wheat couscous. Quick-cooking, high in protein and readily available at most grocery stores, couscous will stand in nicely for bulgur in a tabouli recipe. This version is good for potlucks, picnics and as an accompaniment to barbecue (vegan or otherwise). It also makes good filling for wraps or pitas.

Pour boiling water over couscous and cover for 10 minutes.

Place garlic in food processor and mince. Cut white parts off onions and save them for another recipe. Throw the green parts of the onions, the entire bunch of parsley and the mint in the food processor and pulse until finely chopped.

Stir parsley mixture into couscous until thoroughly blended. Gently stir in cucumber and cherry tomatoes. Chill and serve. Makes about eight reasonable servings as a side dish. (Or one good midnight snack, if you’re me.)

Wow. Marvin Gaye. And I thought it was awesome when they covered Bob Marley.

P.S.: I’ve posted it before, but in case you haven’t seen “One Love” around the world, here it is. I never get tired of it. 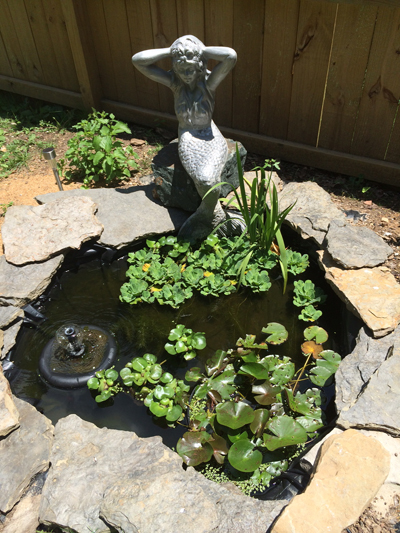 Here’s a quick, super-easy project for anyone who owns a pond, pool or other water source.

Pollinators will see backyard ponds and pools as ideal spots to stop for a drink, especially as the weather warms up. Unfortunately, if you don’t have a safe spot for them to land, they’ll drown.

If you have a backyard pond, your best bet is to toss a water lily or maybe some water lettuce or water hyacinth in there. (Be careful with water hyacinth and water lettuce, as they are invasive species that can wreak havoc if they get into waterways in some areas. They’re OK for small, ornamental ponds that aren’t connected to any streams, creeks or rivers, but I wouldn’t use them in low-lying areas where floodwaters could carry them into local waterways. They do have the advantage of being relatively cheap and spreading quickly, however, which makes them a good choice for shading ornamental ponds to prevent algae bloom.)

If your plants haven’t started growing well yet — or if your water source is a pool rather than a pond — you can recycle wine corks, plastic lids or polystyrene cups into landing pads for pollinators. I cut the bottoms out of polystyrene coffee cups and tossed them into the pond this spring before my plants took hold. They weren’t pretty, but they did the job and kept my bees safe until I got a good assortment of plants.

If you don’t have a pond or pool but would like to provide a safe place for bees, wasps and butterflies to grab a sip of water, cover the bottom of a shallow dish with pebbles and pour just enough water in it to reach the tops of the pebbles so critters can get a drink without drowning. 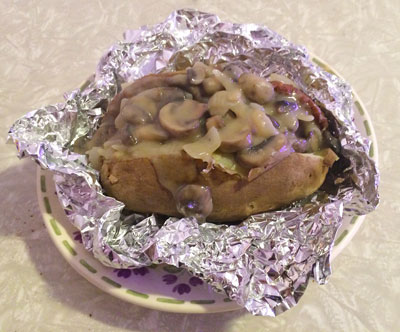 When I was little, my mom used to buy us Salisbury steak TV dinners. I mostly just liked them because they came with mashed potatoes, but the gravy wasn’t bad, either. Think of this as a grown-up, vegan version with a lot better nutritional content.

Bake potatoes. I like to start them in the microwave for about three to four minutes, then brush them with olive oil, wrap them in foil and finish them in the oven. That way, they don’t take forever to cook, but they still taste like a baked potato ought to taste. If you’re in a hurry, you can either bake yours ahead of time or just nuke them, though.

Warm up vegan hamburger patties in the microwave. Cut patties in half. Split potatoes, insert a patty in each and top with gravy. Serve immediately.

The saddest part of this story is the fact that 103 years later, you can read the comments on any online newspaper article about any homicide involving any black defendant, and it will be painfully obvious that some people’s quality of thought hasn’t improved at all in the past century.

Richie Havens sings a medley of Van Morrison and Bob Dylan. I think I might have posted this before, several years ago, but I’d forgotten all about it until I stumbled across it again last weekend. ❤