This is the product of my efforts the past two afternoons. The twinkles you see in the pond are from the all-in-one pump, UV filter and lighting system I bought on sale for $103 (marked down from $129) at Lowe’s this afternoon. Hopefully it will keep the algae down better than the systems I’ve attempted in the past. Bonus that it took less than five minutes to install and required exactly zero skill.

I showed you step 1 of this project — the hole — yesterday. I dug it out a bit more this afternoon, then hit the feed store for some sand: 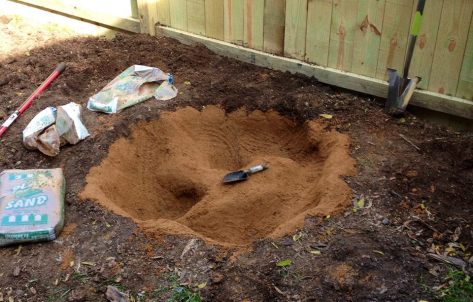 The sand serves as a buffer between the ground and the flexible liner, reducing the risk of punctures and tears that can lead to leaks.

The ridges you see are tree roots. I deliberately chose a spot where we’d had a stump taken out because I knew the soil would be loose and easy to dig, and I wanted some planting shelves in my pond as a safety feature for toads and other small animals that need escape routes. I just dug out the loose dirt and worked around the tree roots, using them as a guide for where the planting shelves should be. I liked the idea of letting nature dictate my design.

When I finished, I laid in the liner, filled up the pond, and went to Ware, Ill., to pick up some flagstone at Lotus Naturescapes. I came home with enough fieldstone veneer to weigh down and conceal the edge of the pond liner, a few extra pieces for garnish, and a big green rock for the mermaid to sit on for less than $37. I also got some good advice about plants and a great idea for a couple of Christmas presents.

This is how the pond looked with the stone installed: 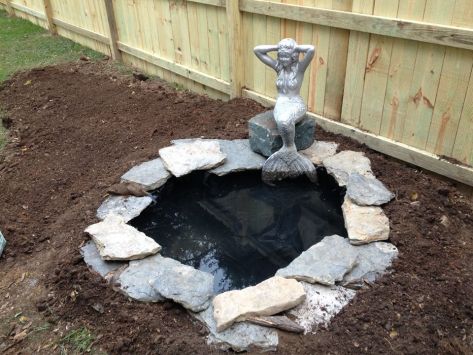 While I was at Lowe’s, I found some shade-friendly rhizomes on sale, so I stocked up: two crested irises, two maidenhair ferns, two New York ferns and two Christmas ferns. The area around the pond is very shady (which pretty much describes our entire yard), so hopefully they’ll look good there.

I’m cold and tired after working outside all afternoon and evening, but it’s nothing a bowl of butternut squash soup and a mug of Irish coffee won’t fix.

Hope your Saturday was good, wherever you are.