With her annual American Heritage Music Festival going on this weekend in Grove, I thought this would be a good time to post a Folk Thursday video of my friend Jana. I couldn’t be there because I already had plans to be in Amarillo for a Route 66 event this weekend, but if you’re in northeastern Oklahoma, I can tell you from personal experience that at least three of the musical acts performing in Grove will be well worth the drive out to see them.

Emily,
blogging from the hotel where Paul McCartney stayed during his Route 66 trip, for whatever that’s worth 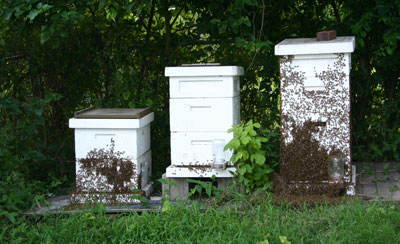 … I can see how a guy might find this a bit intimidating if he didn’t understand what was going on.

I’m still not willing to excuse his conduct altogether, though. Had he simply come to my front door (which is nowhere near my bee yard) and talked to me, I could have explained to him that this is not evidence of a population explosion or a sudden decision by the bees to go all Hitchcock-movie on him or anything like that. What we have here is a phenomenon known as “bearding,” in which large numbers of bees sit near the hive entrance and fan their wings to try to cool it down. The bees aren’t hurting anything; they’re just trying to cope with the Oklahoma heat and humidity like the rest of us.

I think it’s kind of cool to watch, but if I didn’t know what I was looking at, I guess I might think my neighbor had turned into the crazy Apis mellifera lady.

Some of my girls have found even better ways to beat the heat:

If you have a pond and want to do something nice for the environment, consider growing duckweed. It has three advantages: It multiplies rapidly, providing quick shade to prevent algae bloom; it provides good cover and a supplementary food source for tadpoles; and it gives pollinators such as honeybees and wasps a floating runway that allows them to land, get a drink, and take off again without risk of drowning. Pretty cool.