A Facebook conversation prompted me to go looking for photos of my old kitchen in Belleville, Ill. That kitchen had many, many problems. Issues with the drywall beneath the old wallpaper turned a simple painting project into a frantic rag-painting extravaganza, executed at approximately 10 o’clock one evening with bits of leftover paint found in the basement. Meanwhile, the cabinets — much like the ones in my current kitchen — were too dinged-up to repaint in solid colors without a LOT of prep work and too cheaply made to be worth refinishing. I solved the problem by painting scenes from Route 66 on them to distract the eye from the myriad flaws.

At left: the Gemini Giant in Wilmington, Ill.; at right, Scout enjoys a cup of Ted Drewes’ Frozen Custard, which was just about her favorite thing in the world. 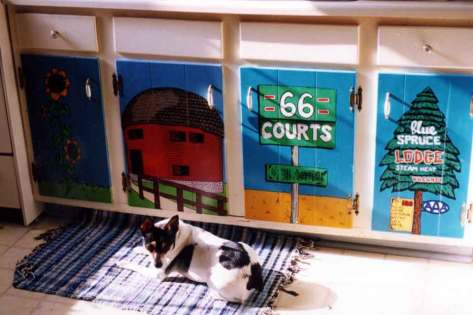 Scout, in a rare moment of calm, seized the opportunity to bask in a sunny spot while I took the picture. This is one of my favorite pictures of her. I love the light and the fact that she looks so content. God, I miss her.

Left to right: Kansas sunflowers; the Round Barn in Arcadia; the 66 Courts sign, formerly in Groom, Texas; and the Blue Spruce Lodge in Gallup, N.M.

In the cabinets above the fridge: the Wigwam Motel in Holbrook, Ariz., and Roy’s Motel and Cafe in Amboy, Calif. Note the ugly faux-country wallpaper. This was early in the process, before I got around to painting the walls.

The Jackrabbit Trading Post’s famous billboard in Joseph City, Ariz., and the Blue Whale in Catoosa. Somehow, I kept thinking the whale’s hat had red trim, even though it’s actually green.

I painted the fronts of the drawers to look like Burma-Shave signs, with toy convertibles attached with bolts and wingnuts for drawer pulls.

Two of my favorite scenes from Route 66: John’s Modern Cabins in Newburg, Mo., and the Blue Swallow Motel in Tucumcari, N.M. 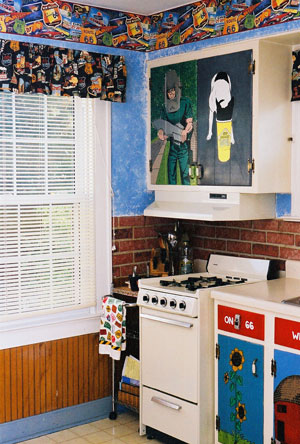 I’d forgotten about that fake brick behind the stove until just now. I found a good buy on the Route 66 wallpaper border (which has since gotten obscenely expensive — I once looked into putting some in my current kitchen and promptly decided it wasn’t worth the cost), and the material I used for the valance was leftover from another project. This picture gives you a pretty good view of the rag-painting treatment I did on the walls to create a faux texture that would cover up the problems I discovered under the wallpaper.

Hopefully my current cabinets will turn out at least this well.