Here are a few photos of people and places on Route 66 in Arizona from Seligman to Oatman: 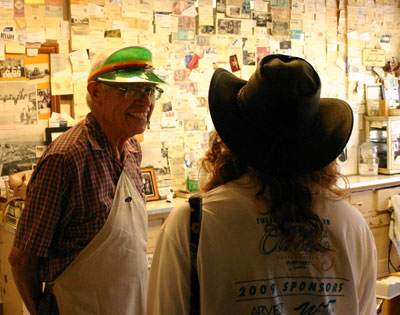 Chatting with the “Guardian Angel of Route 66,” Angel Delgadillo, at his barbershop/gift shop in Seligman. 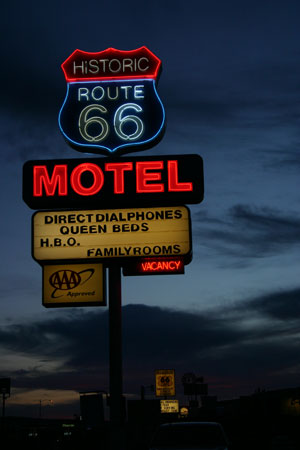 Our evening’s lodging while we were in Seligman. 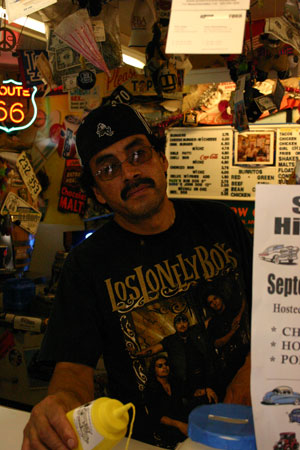 The usual shenanigans at the Snow Cap. The fake-squirting-mustard bottle is one of several long-running gags at the walk-up restaurant, built in 1953 by Angel Delgadillo’s brother, the late Juan Delgadillo. Juan’s descendants are carrying on the traditions, much to the delight — and occasionally befuddlement — of the tourists who come from around the world to visit. 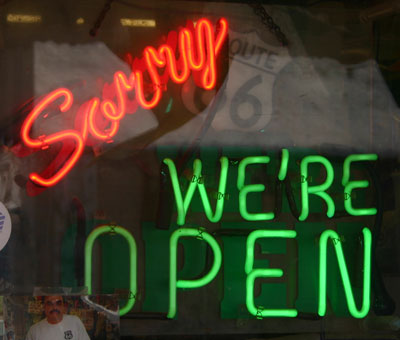 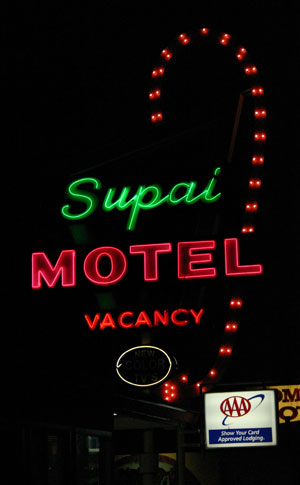 Another lodging option in Seligman with a lovely neon sign. Both the Supai and the Historic Route 66 Motel get high marks from the National Historic Route 66 Federation’s Dining and Lodging Guide, which I highly recommend if you’re planning a trip on 66. 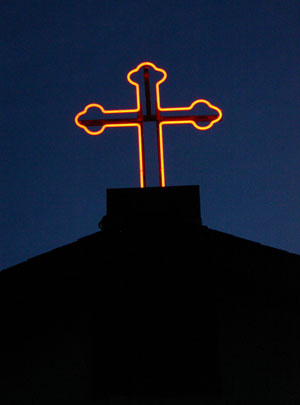 This neon cross, seen on a church a few blocks off 66 in Seligman, was an unexpected treat — and a nice addition to my ever-expanding collection of photos of neon church signs. 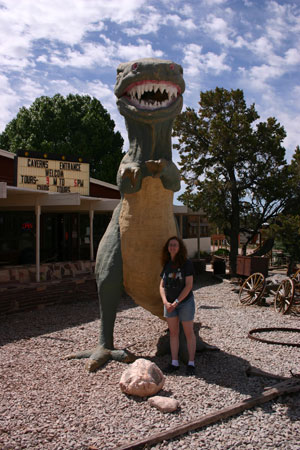 This dinosaur stands outside Grand Canyon Caverns near Peach Springs, Ariz. According to our guide, some scientists, trying to figure out how far the caverns extended, lit red smoke flares. Two weeks later, the smoke was seen emerging from a vent 60 miles away in the Grand Canyon — hence the name “Grand Canyon Caverns.” The dinosaur is a holdover from the days when the place was called “Dinosaur Caverns,” despite the fact that no dinosaur bones had been found anywhere near the cave. This photo was sort of an attempt to recreate a picture my dad took of me standing under a concrete dinosaur in St. Louis when I was about 4. If I ever get around to cleaning out the garage, I’ll dig that photo out and scan it. 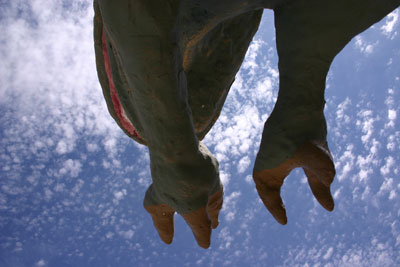 View from below the dinosaur. 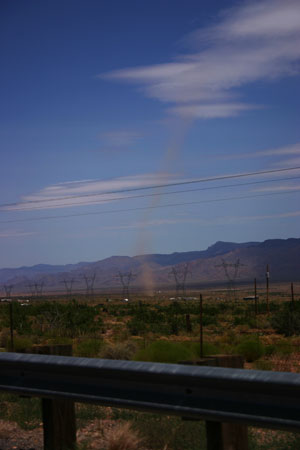 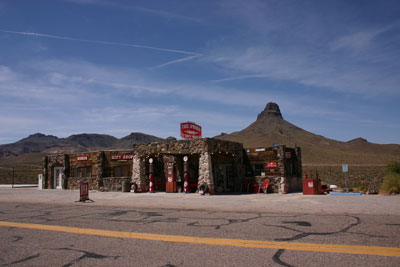 The resurrected Cool Springs Camp. The building burned in the 1960s, and its remnants were blown up in 1991 as part of the filming of the movie Universal Soldier, leaving only a pair of stone pillars and the foundation behind. Chicagoan Ned Leuchtner bought the property in 2001 and began restoring it to its original appearance. It now houses a gift shop. 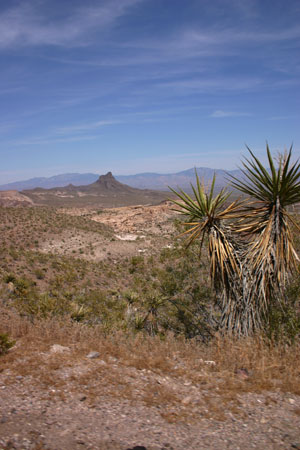 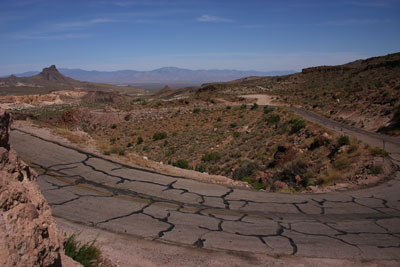 As you pass Cool Springs and head up the long, winding, and sometimes treacherous stretch of 66 leading into the old gold mining town of Oatman, you will see Thimble Mountain in the distance. I shot the first image out the window as Ron was driving. I shot the second from the steps leading to Shaffer Fish Bowl Spring. Other travelers coming down the steps reported that there were no fish in the bowl on this particular day, so I didn’t bother climbing all the way up, as I was eager to get into Oatman to see … 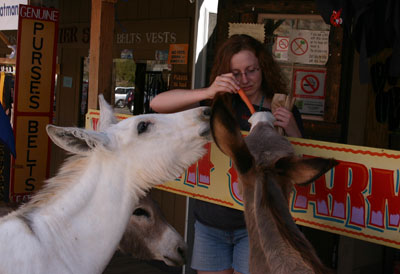 … the famous Oatman burros. Descendants of burros released into the mountains around Oatman when a nearby gold mine no longer needed their services, these “wild” animals have become professional panhandlers. They come into town during the day and bum carrots off the tourists; at night, they go back up into the mountains to sleep.