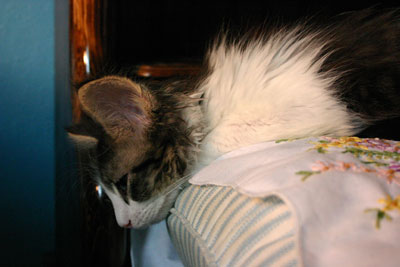 Here are some things I did not include on my to-do list for the night before vacation:

Here are some things my dogs put on their to-do list for the night before I left for vacation:

Thanks to an extremely kind neighbor, the two surviving kittens had a comfortable place to crash while I was on vacation. Without her intervention, they would have ended up at the pound.

One of them is probably going to live with her family for the rest of its life, as her kids have fallen head-over-heels in love with the little booger.

Here is the other one: 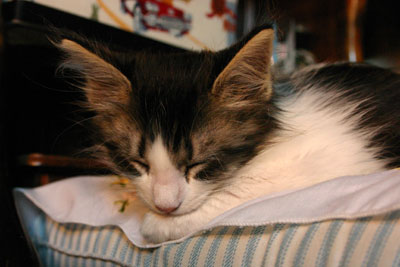 That would be my pillow.

I have assured Ron that this is a temporary situation that will be over as soon as I find a permanent home for the cat. Ron is graciously pretending to believe me.

Between Santa Fe and New Mexico lies a mesa called La Bajada Hill. La Bajada — “the descent” — is home to a steep and treacherous alignment of Route 66 that dates to the road’s earliest days. The La Bajada Hill alignment was bypassed shortly after the road was commissioned, but much of the dirt roadbed remains intact, and while it is no longer passable for most vehicles, the winding trail is ideal for hiking on a summer morning. 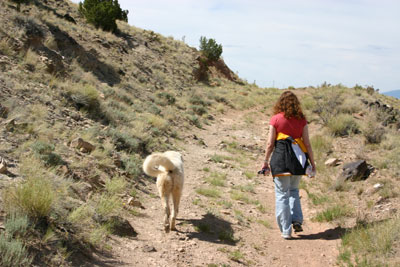 We’ve hiked La Bajada Hill in the past, but this trip brought an unexpected treat: A four-legged guide greeted us near the base of the mesa and accompanied us to the top and back. 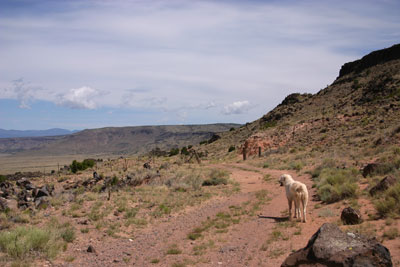 We got the impression that the dog — who probably belongs to one of the ranchers living nearby — makes a habit of playing trail guide for tourists.

The dog wasn’t the only creature on the trail. This pretty little snake was sunning itself on the path as we came around a curve. A Google search later revealed that our serpentine friend was a gopher snake.

The cholla cacti were in bloom. A guy down the street has one of these growing next to his driveway, and it’s absolutely gorgeous. I’d been thinking zoysia for the front yard, but between the cholla and the yucca, I’m starting to give serious thought to some hard-core xeriscaping instead. 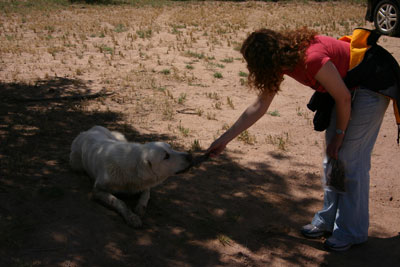 I tipped our tour guide when we got back to the car. I’m not sure what the going rate is, but he seemed pleased with three big pieces of beef jerky.

Here I am, bidding our guide farewell. What a great dog.

And on that note, I’m going to go finish clearing out the car so we can pick up our great dogs from the boarding kennel.

P.S.: Despite the triple-digit temperatures, our garden thrived while we were gone: I harvested a grocery bag full of green beans and another of rat-tailed radishes this morning. We have a lot of weeding to catch up, but we got the worst of it knocked down this morning, and I think if we spend a half-hour or so out there every morning this week, we should be able to whip it right into shape.

I’ll have more for you later, but here are three quick images from my trip, just for appetizers:

God’s promise on the Devil’s Highway: A rainbow descends from a cloud near old U.S. 666.

This lighthouse on the Pacific Coast Highway made me think of a picture puzzle.

Since my last post, I have sorted and edited nearly 350 photos. I have about 150 to go. I’ll post the best.