In 1998, at a Grandpa Pigeon’s store in Fairmont City, Ill., I ran across a clock with a gold plastic crucifix mounted inside a plastic shadowbox at the bottom, surrounded by red velveteen and mirrors and illuminated with red, yellow and green Christmas lights. At the time, I was convinced that it was the Holy Grail of tasteless home decor, and for reasons I still do not fully understand, I passed up the opportunity to buy it.

Early in our relationship, I told Ron about the clock. He assured me that it was not the Grail, because the last known sighting of the Grail had occurred in an antique store in Maine, sometime during the first Bush administration.

The Grail, Ron explained, is actually a plate. Specifically, it is a souvenir collector’s plate featuring a portrait of Jesus, holding a lobster in one hand and draping his free arm around Elvis Presley’s shoulders. Ron’s friend Mike is the only person we know who has actually seen this plate. Sadly, he apparently was possessed by the same evil spirit that led me to pass up the clock, so he didn’t buy the plate. Instead, he went back to his hotel room and thought about the plate. He thought and thought and thought about it. He thought about it all night, and the next morning, he went back to the antique store to buy it.

I didn’t find the Holy Grail today, but while we were at Family Dollar this afternoon, searching for something I needed for school, I found the next best thing: 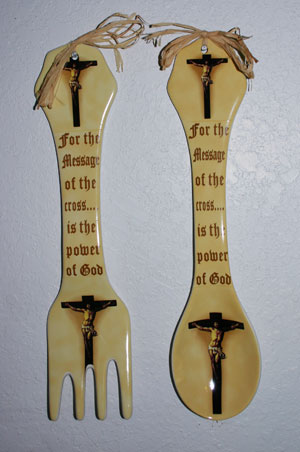 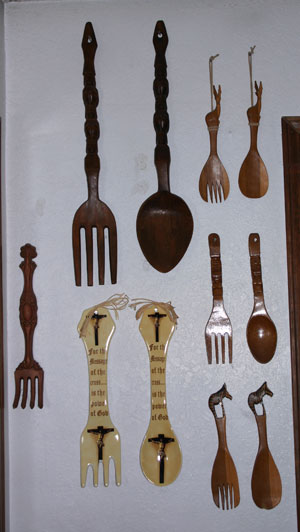 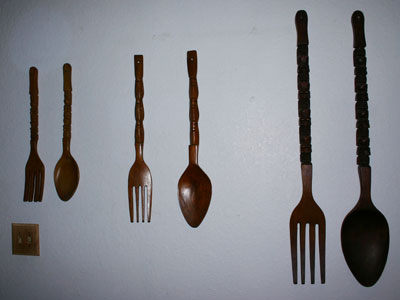 Ron thinks that the new fork and spoon are going to fall off the wall and kill Jason while he is eating. (His food bowl is near that wall.) I assured Ron that Jesus is not going to kill our dog. But if I am wrong, I think “Jesus’ Fork Killed My Dog” would make an awesome name for a rockabilly-punk-fusion band.