In honor of her recent induction into the Country Music Hall of Fame, I thought I’d let Emmylou Harris handle this week’s Folk Thursday.

And just for the record, she is one of several reasons I quit dyeing my hair when the first gray streak started coming in…. 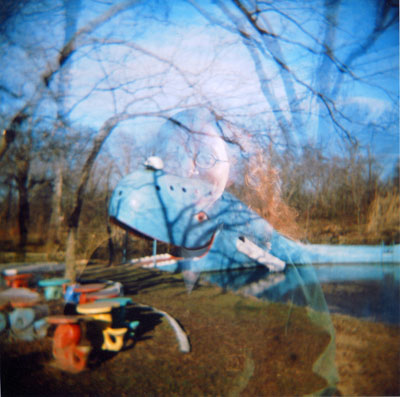 I took almost an entire roll of deliberate double exposures with the Holga last month, just to see what I’d get. This shot — taken during a cleanup project at the Blue Whale on Route 66 in Catoosa on New Year’s Day — is the only one I particularly liked. I shot the first exposure, and then Ron shot the second.

Double-exposure Holga shots are interesting, because a Holga image is already a dicey proposition, and by the time you factor in the unpredictability of a double exposure, you’re talking about a shot that is completely beyond any semblance of control. Most of the time, it doesn’t work, but every now and then, you get something interesting.

I want to get new batteries and a couple of rolls of film for my Nikon F2 and play around with double exposures in a little more controlled way, just to see what I get. I might try to rustle up some 35mm Agfa film and see what kinds of images I can coax out of it.