Anyone who’s dealt with a Holga will find it not at all surprising that out of the entire roll of film I shot the other day on Route 66 here in Tulsa, this turned out to be the best shot:

I don’t even know why I shot it. I was pretty sure I didn’t have any shots left, but I just saw it sitting there and figured I might as well try, since I had to advance the film either way. Somehow I just knew it was going to end up being the best thing on the roll, too. Three rolls in, and I am already learning to appreciate — and exploit — the Holga’s decidedly off-kilter world view.

She’s definitely coming along with me to Illinois this weekend. Maybe I’ll get lucky and that Agfa film Ron ordered for me will come in before I leave Friday. That’d be cool.

I swear, I’m gonna have to design my own camera bag just to accommodate all the equipment I’ve been accumulating lately. Heaven help us if I ever track down my old Magimatic….

Craftster‘s latest challenge is “Super Ugly to Super Awesome.” You have to take something old that cost less than $20 and recon it into something cool. I used an old chair that I’d tried (and failed) to repaint once before. I’d gotten about a fourth of the way into the project and then abandoned it, and the chair sat around here in its half-finished condition for years. It moved with us in that condition. It was awful. I finally got sick of looking at it and decided to use the Craftster challenge as an excuse to do something about it.

I used a “bee” theme because we’d just harvested honey when I started the new paint job, and I was really amped up about our hive. I think it turned out pretty cool.

Here it is, in all its glory: 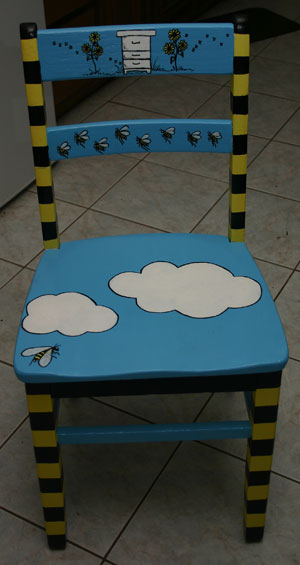 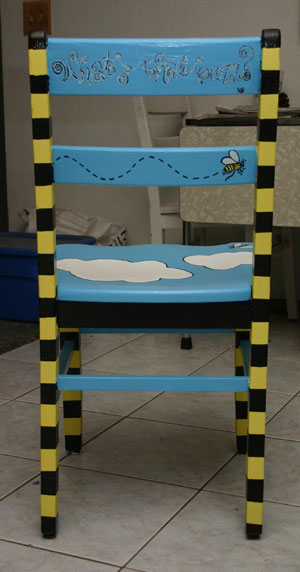 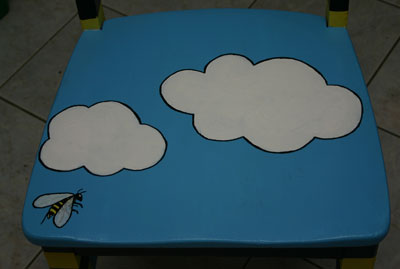 And a couple of before shots. I’d been trying to do a Route 66 theme, but I actually started this thing before we ever traveled 66, and I just kind of didn’t get it. I was also using some techniques and types of paint that were ill-suited to the project. The result was pretty bad. I think you can see why I ditched it before I finished: 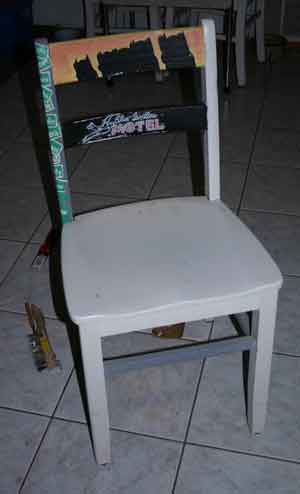 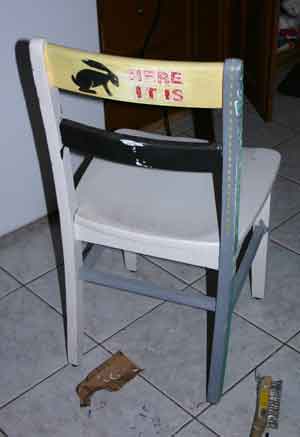 I doubt it will win the challenge, but that’s OK — I already won a cool chair. 🙂