Take possession of your body, and govern its feeling and action. Rise in the strength of Spirit to resist all that is unlike good. God has made man capable of this, and nothing can vitiate the ability and power divinely bestowed on man.
— Mary Baker Eddy

I haven’t run in over a week, mostly because I’ve been playing Whac-A-Mole with various forms of error that kept manifesting themselves as physical symptoms. (I’ll probably have a whole ‘nother riff on that later.) But it was well past time to get back out there today, so I logged a couple of extra miles to make up for some lost time — and to fulfill a promise to a fellow runner.

I had a conversation online yesterday with a distance runner who was feeling discouraged after a bad run. He suspected that his problems were the result of disrupting his usual routines, and he decided the solution was to follow all of his routines concerning food, sleep, pace, etc. to the letter from now on, lest he risk crashing and burning again.

Routines are nice. I use them myself. They can be handy tools for getting things done efficiently. They even teach us some spiritual lessons, as they reflect divine Principle through qualities like order, discipline, and so forth. But routines — like any other tool — are best used in a controlled manner. If the tool starts to control the user, instead of the other way around, you’ve got problems. (This is why you probably shouldn’t attempt to operate a table saw while dressed like Stevie Nicks.)

I assured my new friend that while routines have their place, they aren’t magic, and the relative success or failure of any given run is entirely dependent on the runner’s ability to understand one simple fact:

You can run exactly as far as you think you can.

I promised my friend that I would prove this point before the weekend was out.

To that end, I took what was supposed to be an easy five-mile jog on a treadmill in an air-conditioned gym and stretched it into a seven-mile run (the farthest I’ve gone since November) down a hilly stretch of Route 66 on a steamy July evening, ignoring at least a half-dozen of my own routines in the process.

Was it hot? Yeah. Was I tired? Sure. Did my legs try to convince me they were going to cramp up about five and a half miles in? Yup. Did I accept any of that as part of my experience? Not on your life.

If I’d been governed by routines, I’d have given up and fled to the air-conditioned comfort of the gym after a mile or two in the heat. But then I would have missed the dazzling blue sky behind the Day and Nite Cleaners building, the encouraging smile from the scruffy-looking guy who flashed a peace sign at me as we passed each other on the sidewalk (I returned the gesture and the smile, of course), and the beautiful plains coreopsis that was growing up through a crack in the sidewalk.

Of course we want to exercise common sense and not be foolish or reckless in our activities (which is exactly why I ended my run after seven miles instead of attempting a few more in a somewhat dicey area of town, with the sun starting to set, after an unnerving encounter with a random motorist who was just a little bit too friendly) … but when we understand that we are limited only by our beliefs about matter — and not by matter itself — we can break through those limits and enjoy wholesome, pleasant activities without having to be afraid that we’ll pay some terrible penalty for breaking with our usual routines.

Next scheduled run: Tuesday at the gym … probably something in the three-to-five-mile range 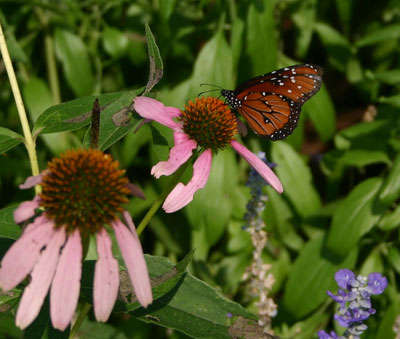 I needed to go to the zoo Saturday afternoon to take a photo of a Ganesha statue for my goddaughter, Remy, whose room is decorated in a jungle theme. Her mom asked me to shoot an elephant, a giraffe, or a hippo. We have kind of a tradition involving photographs of animal statues, so I’m hooking her up with a triptych featuring Ganesha, a blue fiberglass hippo from Edmond, and Bob Cassilly’s giraffe from the Dallas Zoo. 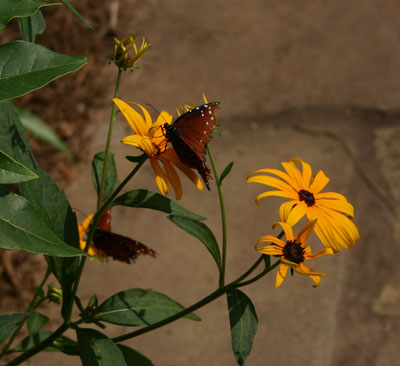 While Ron and I were at the zoo, we went to the Wings of Wonder exhibit, which is a big walk-through greenhouse containing lots of flowers and several species of butterflies. It made me think of the Insectarium at the St. Louis Zoo.

St. Louis’ Insectarium is a lovely educational exhibit that gives viewers a peek at the habits of some of the less cuddly species that share the planet with us. But I love it because it’s the best example of irony I’ve ever seen.

As you walk into the Insectarium, you are greeted by a big sign proclaiming that the exhibit was made possible by a generous donation from Monsanto.

Yes, that Monsanto. The folks who gave us Roundup herbicide, Ortho pesticides, and one of the nastiest Superfund sites in the country. One of the world’s largest purveyors of bug spray sponsored a huge exhibit about cohabiting peaceably with bugs.

I can’t think of the Insectarium without bursting into song:

They cut down all the trees, put ’em in a tree museum
And they’re charging the people a dollar and a half just to see ’em….
— Joni Mitchell

Wings of Wonder didn’t have any glaring irony attached to it. It was just pretty.

I shot a few pictures while we were in there; of particular interest was the chrysalis house, a little kiosk sort of affair made of wood and screen wire where caterpillars turn into butterflies. Two newly hatched butterflies were drying their wings while we were there; the young docent was very nice about letting me get close to shoot pictures: 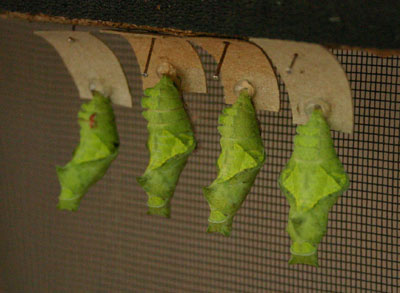 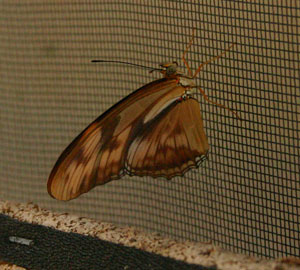 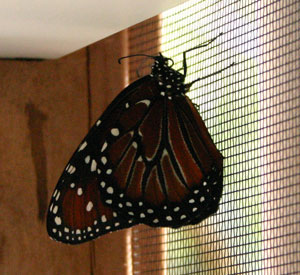 I also got a picture of this character sipping nectar from a black-eyed Susan: 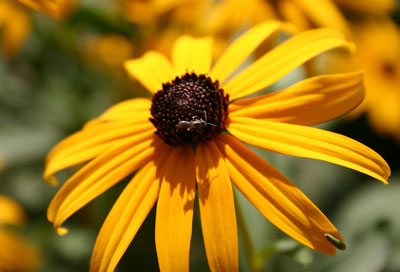 Hope your weekend is full of beautiful creatures.