We finished the bench and got the table about 80 percent done Sunday evening before we had to stop because we’d drained all of our cordless drill batteries (three batteries, two drills) and run out of deck screws. Scout is demonstrating the correct way to bask in the sunshine on the bench, above. 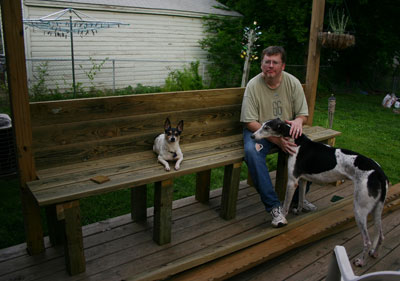 Here’s another view of the bench, starring Scout, Ron, and Jason.

We still have to install the front and one end of the planting table and build two more supports to go underneath it, but I messed up when I was cutting the 4x4s Saturday and made them too short (I forgot the table would have to have clearance for me to put a bench or stool in front so I can sit and work), so we have to buy another 8-foot 4×4 and build a couple more supports to put under the table before we can finish … but here’s where we are with it thus far:

It’s not perfect, and I’m sure Daddy could have done a much better job with the same project, but considering our lack of experience — and the fact that we were working with boards that were warped and uneven, on a deck that I am fairly certain was constructed by an intoxicated chimp (I still have no idea how Ron managed to make the pergola look so good, given the way that deck runs uphill and downhill, with the boards sort of undulating along next to each other) — I think it turned out OK. It’s solid, which is the important thing, and hopefully the insurance underwriter will pipe down and leave us alone now.

I still think the idea of guardrails on a deck that’s less than 18 inches off the ground is the most ridiculous thing I’ve ever heard, but I’ve wanted that bench all along, and the table will come in very handy next spring when I’m starting seeds. When January rolls around, my plan is to get some thin concrete pavers and lay them all along the bottom of the potting bench to absorb heat, then stretch some clear plastic over the top to help hold it in.

At some point, I will get a piece of plywood, cut it to fit the table, and seal it so it’s watertight enough to double as a sand-and-water table and/or a place to hose off vegetables. I want Jamie to be able to make origami boats and have storms at sea and let Godzilla eat hapless sandcastle villagers on my deck if the mood strikes him.

My goal is for all of Jamie’s trips to my house to involve fingerpaints, playing with water, digging for worms, petting the chickens, making cookies with at least fourteen different kinds of sprinkles on top, chasing the ice-cream truck, feeding the ducks at River Parks, petting the stingrays at the aquarium, and sticking his arm all the way down into the box of sugar-sweetened cereal of his choice to extract the toy. That’s the kind of stuff you can’t do if you’re the mommy, because you risk setting dangerous precedents and turning your child into an insufferable little brat … but if you’re the hippie aunt who lives 500 miles away, you can act like an overgrown 5-year-old with total impunity.

Hope your week is full of cool building projects and ice cream and chickens and toy boats and lots of opportunities to let Godzilla eat imaginary villagers. 🙂