Here are more images from our trip last weekend:

Our Lady of the Highways, Route 66, Raymond, Ill.

Soulsby Station, Mt. Olive, Ill. We helped a little bit with the restoration work — which was done a few years ago under the supervision of the late Tom Teague — at this historic gas station.

Montana the bunny signs an autograph with her teeth — and earns a treat for her efforts — at Henry’s Rabbit Ranch on Route 66 in Staunton, Ill.

This fiberglass rabbit, also at Henry’s Rabbit Ranch, is patterned after the one at the Jackrabbit Trading Post on Route 66 in Joseph City, Ariz. Photo by Ron. 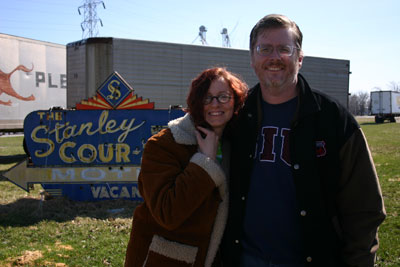 Ron and I were involved in Friends of the Mother Road‘s effort to rescue the Stanley Cour-Tel sign and keep it on Route 66 after the motel itself was demolished to make way for an airport expansion. Photo by Rich Henry. 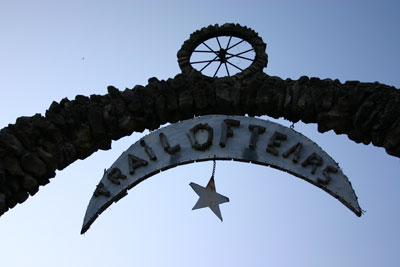 Entrance to the late Larry Baggett‘s property, which is on the Trail of Tears and features many sculptures and plantings honoring the Cherokees who passed this way.

Larry, a folk artist and all-around Renaissance man who studied with everyone from Jesuit priests to Edgar Cayce, practiced a sort of homespun religion that contained heavy doses of both, mixed in with astrology, numerology, Native American folklore, and Ozark wisdom. He was a bit of a shaman who welcomed Route 66 travelers and firmly believed his house to be haunted by witches and ghosts — a situation which worried him not at all. He spoke of these otherworldly visitors the way the rest of us would talk about an annoying roommate. Larry was different … but his penchant for wearing Big Smith overalls and the fondness with which he spoke of his beehives told me all I really needed to know about him. 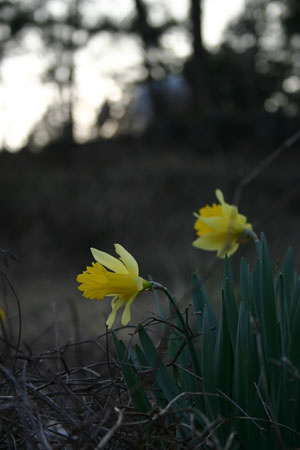 If you look closely at the background of this shot of Larry’s daffodils, you can make out the silhouette of a bent, awkward figure between the trees. This figure is a sculpture of a deformed boy; his pet bull is also visible in the background, although you’ve got to know what you’re looking at to see it. Larry once told us the folktale behind the sculpture, but I forget the details now.

The back side of Larry’s Trail of Tears sign. It reads: “HAVE A GOOD TRIP.” Larry meant it, too. On our first visit, he taught Ron a special prayer for protection in the car.

This no-trespassing sign stands in stark contrast to the statue to which it is chained. Larry created the statue — a self-portrait — to communicate a message of welcome and friendship to all those who took the time to cruise up his steep driveway and inspect the strange sculptures and statues he created.