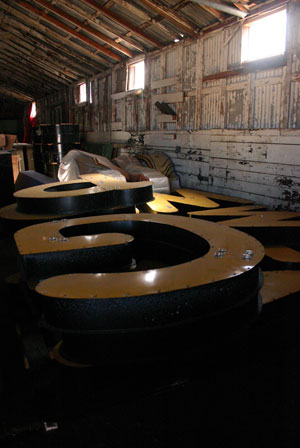 Ron will have a more detailed post about this later on his blog, but I couldn’t resist posting this image from our trip to Claude Neon Federal’s warehouse the other day. I just love the way that light is pouring in the windows.

We went over there so we could get pictures of the historic Meadow Gold sign, which was taken down and placed in storage a couple of years ago after a local car dealer with no apparent respect for history tore down the National-Register-listed building it was sitting on to make way for his umpteenth car lot … then moved his whole operation to Broken Arrow before a single set of wheels touched the space where the building and sign had been.

I have no idea what possessed him to trash a piece of Route 66 history on his way out of town. Legalized vandalism, I call it, and proof positive that Tulsa desperately needs some historic preservation ordinances with big, sharp teeth to prevent this kind of senseless destruction from occurring in the future.

Anyway, a group of dedicated preservationists managed to get the sign off the building and into storage before it could be destroyed, and now — with the help of a federal grant and a lot of private donations — it’s been completely restored and is going to be placed on a new structure a couple of miles west of its old location.

As someone who dinks around with neon (I hesitate to call my clumsy and inexperienced little self an “artist” at this point), I was delighted to have the opportunity to tour CNF’s operation. Their neon crew does absolutely beautiful work, and it was great to see their setup. Somebody there has modified a cannon fire, adding a third flame on a swivel that you can move in and out as needed. It looked handy as all get-out. I’ve never seen anything quite like it. I’m already thinking about some spare parts I’ve got in the garage and trying to decide whether I could build something similar, albeit much smaller, out of old crossfire parts.

It was really wonderful to see the sign again. It was always one of my favorite parts of a trip through Tulsa on Route 66, and I’ve missed it since it came down in 2004. It’s nice to visit old friends.

For more photos, visit Ron’s blog. He should have additional images up later.

Sorry I haven’t posted much lately. Things have been nuts around here. I had two people out for several days this week at the office (one sick and one on jury duty), and I spent the first part of the week fighting a claim of cold or flu or something, so I’ve been pretty exhausted and have just collapsed in a heap when I got home the past couple of evenings.

I felt about a million times better when I got up this morning (I’ll share the helpful insight that Scout gave me on that later), and everybody was back at the office, so things went pretty smoothly today, but we have a pretty big section this week, so I still found myself back at the office from 9 p.m. to midnight.

Ron wants me to Photoshop some pictures I shot for him the other day, and Scout and Songdog are getting awfully interested in the chickens and the gerbil (sometimes I think Mutual of Omaha ought to sponsor my home office, because it is Wild Kingdom in here), so I’d better get offline and get to work editing photos and protecting the herbivores from the carnivores here.

I’ll fill you in on how Scout helped my practitioner chase away a cold as soon as I get a hand free.

P.S.: I saw a bunch of bright yellow daffodils in my neighbor’s yard, and flowering trees are blooming all over the place. Can’t wait for the redbuds and dogwoods to bloom on the river trail. Maybe I’ll have time to go for a run on Saturday and see what’s new. My lilies are coming up.