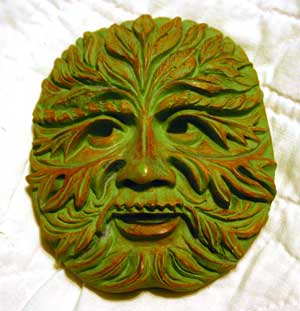 I taught mythology for a year and am quite fond of English folklore, so a Green Man seemed like an appropriate addition to my garden. Unfortunately, they tend to fall into two categories: A.) Ugly, and B.) Overpriced.

This evening, I was fortunate enough to wander into a store on 15th Street that had just gotten several Green Man items, including the plaque you see above, which came with a lovely little book about the Green Man and the legends that surround him.

The store was one of these places that likes to cover its bases: Crosses hang on the wall above a shelf of New Age books, and if you need a Tibetan prayer flag or a deck of tarot cards, you can get it here. One-stop shopping for all your religious needs, I suppose. It was just off-the-wall enough that I held out some small measure of hope that I might find the Holy Grail of Weird Crap to Hang on the Garden Gate: a Sheela-Na-Gig.

I’m not really surprised. I’ve never seen a Sheela for sale. I’m not sure there’d be much demand for them. They’re pretty grotesque, and rather risque. Strange figures, but the history behind them is fascinating — and mysterious. They’re often regarded as a sort of female counterpart to the Green Man. I think it would be awfully cool to have a Sheela hiding somewhere in my garden.

Ah, well. I’m just grateful to have a Green Man at last. And I have been inspired by the photograph on the cover of the book that came with my Green Man. The image shows a giant Green Man sculpture — sort of a topiary thing — that appears to be surfacing from the ground. The sculpture is found at the Gardens of Heligan in England. (Note: Heligan Web site contains chirping bird sound effects that start automatically, so turn down your volume if your boss thinks you’re working.)

Click here and scroll down to see a picture of the Green Man sculpture.

I have got to figure out how to build one of these in my garden, because this is the coolest thing ever. It looks like what you’d get if you commissioned Larry Baggett to design you a lawn ornament and then hired Edward Scissorhands as a subcontractor to actually build the thing.

Speaking of cool stuff in the garden, Ron had a little adventure today.

The bees had gotten a bit quiet lately, and Ron was afraid they might have been attacked by varroa mites. Wintergreen oil will get rid of mites, but you aren’t supposed to use it until later in the fall. In the meantime, I suggested that he look into the hive, check the bees’ condition, and sprinkle them with powdered sugar if necessary. (A dusting of powdered sugar will prompt the bees to groom themselves, removing any mites in the process.)

Ron opened the hive to find a colony of healthy, active bees. He went ahead and sifted some sugar over them anyway, just as a precaution. His report on the experience made me laugh out loud:

Note to self: If you ever need to p*ss off honeybees, sift powdered sugar over them.

Didn”t get stung, but my inspection of the beehive reveals that the girls are very much alive. They were behaving fairly well until I sifted powered sugar over the main brooder. Then that created a mess of angry, dusty honeybees buzzing my head. Now they know how Milton Berle felt when his sidekick yelled “Makeup!” and did the deed. Can’t blame them for being irritated, actually.

He went on to say that the super he added this summer is about three-fourths of the way full of honey. That’s pretty impressive, considering the drought and the fact that this is still a relatively young hive — we just got them in the spring of 2005, so this is only their second season.

Lousy year for tomatoes, but a good year for honey. I’m OK with that.