I made one of my infamous whirlwind trips west this weekend to help out with a historic preservation project the Texas Old Route 66 Association was doing at the Triangle Motel in Amarillo.

The Triangle is a stunning property — very Deco, with Streamline Moderne curves at the corners and a wonderful old neon sign announcing its presence.

A man named Alan McNeil has purchased the building — which has been used for nothing but storage for the past 20 years — and is trying to restore it to its original glory. It’s a daunting task even if you have an enormous amount of money and time, but Alan is in the position of working on a shoestring while playing beat-the-clock with the city, as the building was slated for abatement (that’s bureaucratese for “demolition”) and has been granted a one-year stay of execution, during which time he has to show significant improvement to the property.

He indicated to me yesterday that the task seemed less overwhelming after our crew descended on the property. It’s amazing what a few dedicated roadies can accomplish in a short time.

I left Tulsa a few minutes before 5 p.m. Friday and headed for Booker, TX, where I was to spend the night with my friends Croc and Cheryl. Croc is president of the Texas Old Route 66 Association.

I rolled into their driveway right around 11:30 p.m. We’re all nightowls, so we sat up for a little while, talking about my trip and the next morning’s project and what they’d been up to recently. I tumbled into bed at 1 a.m.; I think I was asleep before my head hit the pillow.

Four hours later, I was back up and enjoying a cup of Red Zinger tea. You know you’re hanging out with the right sort of people when your host fixes you Red Zinger for breakfast and gives you honey instead of sugar to sweeten it. 🙂

On the way from Booker to Amarillo, Cheryl and I saw a coyote loping across the road. I’ve never seen one that close before. It was beautiful.

We got to the Triangle around 8:30 a.m. and spent roughly six hours on an eight-man volunteer crew, dragging 20 years’ worth of detritus — waterlogged furniture, boxes of broken household appliances, and all sorts of discarded rubbish — out of three rooms. 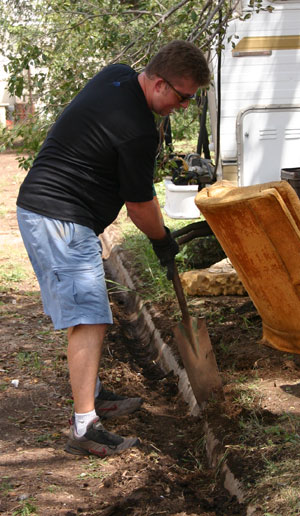 If you can imagine spending a day moving the contents of five or six houses and mucking out a half-dozen stalls, that’s about what our crew (including my friend Willy from Colorado, pictured above) did yesterday. We completely filled one of those giant rollaway trash bins, and we weren’t even putting the furniture in them — we left most of that outside for Alan to move with a bulldozer later, because it was too large and heavy to lift up and chuck into the bin.

It was some of the hardest work I’ve ever done, but it was also some of the most satisfying.

Alan’s dog, Rocky, wanted to help, but Alan wouldn’t let him. He’s a good dog. I think he liked having lots of people around to pet him.

At the end of the day, I got Alan to sign my historic jeans. I didn’t add any stains to them that I could see, but I ground a healthy amount of dirt into the fabric. I ended the day exactly the way I like to end a day at a work site: Sunburned, exhausted, and ecstatic.

When I finished up at the Triangle, I zipped over to Adrian to get pictures of the Bent Door to go with an article Ron wrote for the Route 66 Pulse, then put my foot in the proverbial carburetor and rolled into my driveway at 12:30 a.m. — in plenty of time to take a desperately needed shower (that’s easily the filthiest I’ve been in 20 years!) before I collapsed in a heap.

Our next work day will probably be at the Bent Door sometime this fall. I can hardly wait. 🙂

Hope your weekend was as wonderful as mine. When I get time, I’ll post the pictures I shot here in Tulsa this afternoon.