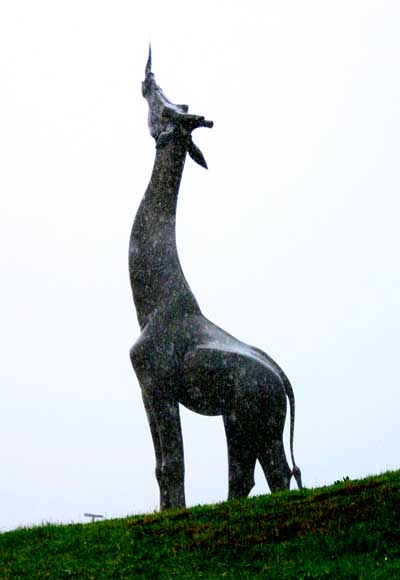 We got home from Austin a couple of hours ago. Traffic on the way home was nuts. It was pouring rain in Dallas, which caused flooding on the expressways that closed lanes and gummed up the works enough to cause two hours’ worth of delays, and then we ran into a 50-minute delay in a construction zone near the Oklahoma border.

It was maddening, but I was grateful for the rain (which also reached Tulsa and brought some desperately needed moisture … it’s raining here right now and apparently has been all weekend). And while we were inching through Dallas, I had a chance to get a picture of the giant giraffe that stands outside the Dallas Zoo.

Before we ran into the traffic hassles, we enjoyed a pleasant cruise along U.S. 77 that took us through Italy, Texas, where we found the awesome dome apartment complex I mentioned the other day:

They have added several domes since our last visit a year ago, and more are under construction. Read the Web site about them — it’s really interesting. In addition to being environmentally friendly (domes in general and monolithic domes in particular tend to be very energy-efficient), they’re designed to be affordable for people on limited incomes. The biggest ones run $110 a week, which includes utilities.

If I had money to invest, I’d build some of these in Tulsa … starting with a big one for myself. 🙂