So I looked in the worm bin again tonight. It looks like some kind of worm swingers’ club in there. This time two days ago, I had never seen worms mate. Tonight, I look in the bin, and they’re all over each other like a bunch of teenagers at the drive-in.

I am, of course, delighted. Their bedding looks a little too wet — especially the lower layers, which are mostly castings, which I need to harvest soon — but apparently they like it. I hope they have lots of babies so I can feed them lots more of my kitchen scraps. Tomorrow, we are going to find out how they like sweet potato peelings, as I am planning to make a batch of candied sweet potatoes and some stuffing for dinner tomorrow night.

Here is a picture of some of the worms:

I also took a picture of two tiny spiders that were hiding in the zipper part of the Ziploc bag that I am using to store my okra seeds. I need to find a safe place to release them. I don’t want them to starve to death in that bag (I see no signs of other bugs — just spiders), but I don’t want them running around my house, either. Tiny as they are, they are still arachnids, and I still am not cool with arachnids taking up residence in my home.

Anyway, here they are: 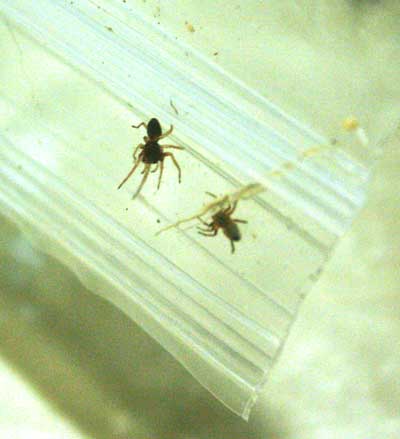 That’s about all I have to report today, aside from the usual pigeons hanging out above the Broken Arrow Expressway.