The yard was a busy place today. I came home for lunch and spent a few minutes pulling dead plants out of the garden and harvesting seeds from the dried okra pods. Tiny spiders kept running out of the pods. I guess they were hibernating in there.

After work, I found a box from my parents on the front porch. This was inside: 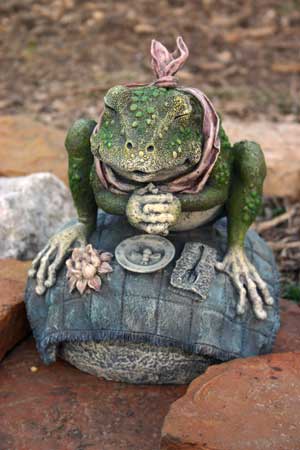 Mom knows I’m nuts about frogs. If you look closely, you can see that this one is saying grace over the bug he is having for dinner. I put him next to the pond, where I hope I will be seeing a lot of real frogs this spring.

While I was outside, I found another surprise: a dandelion blooming next to the house. 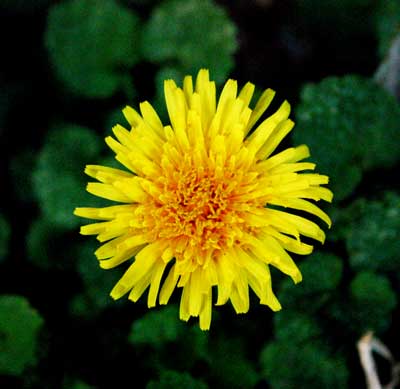 Skittles, my neighbor’s hilarious pit bull mix, wanted to leap over the fence and come play, but she couldn’t, because her owner had her tied up to thwart her escape attempts. When Skittles gets really frustrated, she goes to the end of her leash and jumps up and down, which cracks me up to no end. Since I had the camera in my hand anyway, I couldn’t resist recording her performance for posterity. It’s not a great shot (too dark out to speed up the shutter enough to catch a leaping dog in midair), but you get the idea:

Scout hates Skittles. She also hates it when Songdog pesters her, which he was doing while I was trying to take her picture … hence the disgusted look on her face: 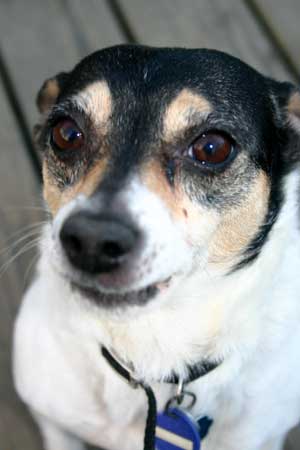 There’s a magnolia tree down the street that looks absolutely gorgeous. I don’t know why I never noticed it before. I love magnolias. I can’t wait to see it bloom this spring.

The Japanese honeysuckle vine is trying to sneak back into the garden. I’ll have to trim it back so it doesn’t creep through the fence and take over this spring. I know it’s an invasive species and I’m supposed to hate it, but honeysuckle blossoms smell so nice, I just can’t bring myself to work very hard at eradicating this vine. As long as it stays on the back side of the fence and doesn’t choke out my tomatoes, I think we can coexist peaceably. Besides, our honeybees love it.

Gotta run. I have to rustle up something for dinner before I leave for church.