Ron and I took a walk along the river this afternoon. Here are some of the things we saw:

2. Ducks. I love ducks. Look at those beautiful mallard drakes, with the dark green feathers on their heads. Lovely creatures.

3. A big flock of gulls. Some guy was sitting on the bank, throwing bread or something into the water for the birds to eat. We saw about a kajillion of them out there. They were splashing into the water after the food and circling around, waiting for him to throw another piece. I didn’t think I’d gotten much, but I came up with a few decent shots. Here they are: 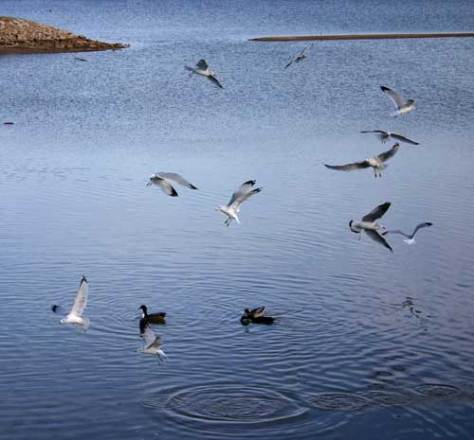 You can see the ducks puttering around among the seagulls here.

These two were about to take off after swooping down into the water for a snack.

This is just a tiny part of the flock.

I think these guys need an air traffic controller. We watched them fly in front of each other and try to land at the same time and just about crash into each other umpteen times.

If I’d had a bigger lens, I could have gotten an even better shot, but I think this one is pretty decent.

4. Sunset. I played with the camera to try to do that sparkly-twinkly-diamond thing with the reflections on the water. There was too much light to speed up the ISO enough to get a great effect, but you can see a few twinkles in this picture. The second one was a failed attempt that still turned out sort of pretty, I thought.

Hope you had a chance to get out and enjoy your day, wherever you are. I don’t know how long this pretty weather will last, but I’ll take 70 degrees in January for as long as I can get it.